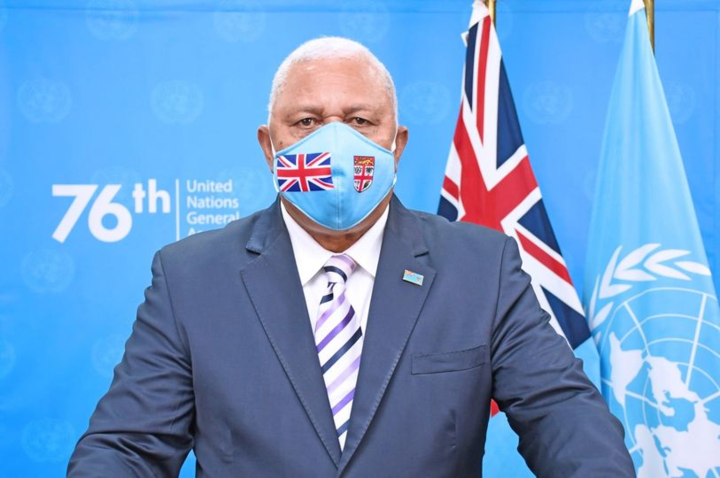 Fiji's Prime Minister, Frank Bainimarama, has called on world leaders to produce a time-bound and costed plan for the full vaccination of developing countries against Covid-19.

Bainimarama, who was speaking to the United Nations General Assembly on Sunday via video link, said new levels of global co-operation were needed to avert future pandemics, while lamenting the inequity on display in the pandemic.

"It is appalling that wealthier countries are already considering third doses or boosters for their citizens, while millions of people including frontline healthcare workers in the developing world cannot access a single dose.

"Globally, thousands of lives are still being lost every day to the virus."

Bainimarama said more than 98-percent of Fijians had received their first dose of a Covid-19 vaccine, adding that the country's next challenge will be to restore the 100-thousand jobs lost in the pandemic.

Samoa's government has launched an investigation into the cash-strapped national airline.

A report by the Ministry of Public Enterprises last month showed losses of more than US$14-million (37-million tālā) over the last two financial years after the global pandemic closed borders.

The Samoa Observer reports Leatinu'u saying some necessary action will be taken in due course.

The newspaper says the figures show the airline sliding deeper into functional bankruptcy with the gap between its assets and liabilities jumping by nearly 60 per cent in the 2020 fiscal year, from a mere US$4-million (11-million tālā) the year prior.

Meanwhile, the FAST party-led government is reportedly having troubles deciding the fate of a leased Boeing 737-800 aircraft currently undergoing safety checks in Australia.

In her speech at the UN General Assembly, Samoa's prime minister has reflected on the months-long political standoff in her country earlier this year.

The impasse was an unprecedented test of Samoa's constitution, involving a number of court cases, and delayed Fiame Naomi Mata'afa taking office by several months.

"Many labelled the events that unfolded following our 2021 election a constitutional crisis," she said in her UN speech.

"While these were difficult times for Samoa, it was also a key part of our journey moving forward as a mature democracy."

A Covid-19 vaccination milestone has been reached in New Zealand, with more than five million doses administered throughout the country.

According to the Ministry of Health, 82 percent of Auckland residents have now received one dose and 46 percent have had both doses.

The government has said it wants the city to hit the 90 percent milestone by the time it makes its next alert level decision on 4 October.

Meanwhile, more than 300 thousand Maori have received the first dose and nearly 157 thousand are fully vaccinated - 110 thousand Pacifika have had both doses.

Vanuatu is asking the International Court of Justice to issue an opinion on present and future generations' right to be protected from climate change.

Vanuatu is among more than a dozen Pacific nations dealing with rising sea levels and more frequent severe storms that can wipe out much of their economies.

In a statement, Vanuatu said current levels of action and support for vulnerable developing countries are insufficient.

It said Vanuatu wants the ICJ to clarify the responsibilities for climate change under international law.

Although not binding, a climate change ICJ advisory opinion would add great legal weight to the increasing amount of climate litigation happening globally.