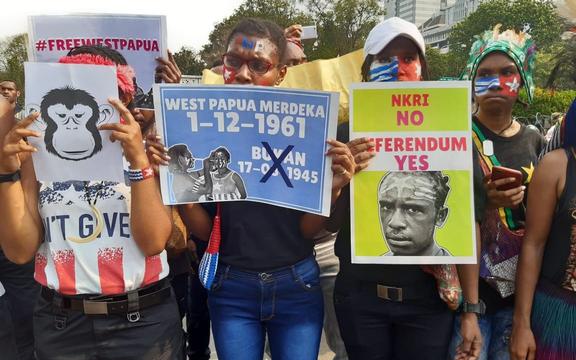 Health officials say parents and guardians are encouraged to register their children to be vaccinated and their consent is mandatory before children can be vaccinated.

Fiji's health officials say while the incidence and severity of Covid-19 are lower with children, Fiji has recorded severe examples of the virus in children, and children can carry and spread the infection to others.

Latest reports show a nine-year-old boy has died from Covid-19 at his home in Tailevu and his family said he had a cough and was short of breath for two weeks prior.

There have been four more Covid related deaths in Fiji bringing the toll to 636 since April and 638 in total.

Concerns over forcible dispersal of Papua protest in Jakarta

A human rights organisation has called for an investigation into police conduct in the arrest of 17 Papuan protestors at the US Embassy in Jakarta.

The Papua Advocacy Team alleges that during the dispersal of the rally, protesters were assaulted by police and a Papuan woman was sexually harassed.

The news outlet Kompas reports that the Team urged Indonesia's police command to take action against the officers and to apologise.

Jakarta police say the demonstration was not allowed, due to restrictions in place to prevent the spread of Covid-19.

The clashes erupted after members of the Kimyal tribe armed with arrows, bows and machetes attacked Yali tribesmen in Yahukimo district on Sunday.

The AAP quotes police spokesman Ahmad Musthofa Kamal saying about 1000 people sought refuge at a local police station in the wake of the attacks. Covid-19 patient dies in French Polynesia according to media reports

Media reports in French Polynesia say a Covid-19 patient in hospital died over the weekend although the health ministry reports no pandemic-related fatalities for the last 72 hours.

If confirmed the man would be the second person to die of covid in the Marquesas islands, which have been spared the high infection rates seen in the Society islands.

The official death toll is still at 624 and excludes an unspecified number of people who died at home.

86 patients are left, including 23 in intensive care in Tahiti.

Latest figures show that 66 percent of those over the age of 12 have had at least one jab and almost 62 percent of them are fully vaccinated. Medical services are stretched because of a rapid spread of Covid-19 Photo: FB French High Commission in French Polynesia

The Papua New Guinea pandemic controller, David Manning, has apologised to the country's Hindu community for what he called a "grave and unfortunate error. "

A letter from Mr Manning's deputy read, quote "we note that this is a form of idol worshipping which is morally inappropriate and against our Christian values."

Mr Manning, who is also police commissioner, apologised for the error to the president of the Port Moresby Durga Puja Committee, Puspendu Maity.

Hindu statesman Rajan Zed said calling prayers for the goddess Durga "morally inappropriate" was quite disturbing for all Hindus. French Polynesia's transport minister has been meeting senior officials in Paris to promote plans to upgrade the airport in the Marquesas islands for international travel.

Jean-Christophe Bouissou is reviving the long-standing project and expanded discussions to also consider Rangiroa and Bora Bora for international flights.

Mr Bouissou also said one goal is to reverse flows of migration from the outer islands to Tahiti.

"Our wish is to allow the inhabitants of the archipelagos to be born, to be able to live and finish their lives at home", he said. Distance markers to various countries are seen past the main town hall on Hiva Oa, the second largest island of the Marquesas Islands, French Polynesia Photo: AFP or licensors