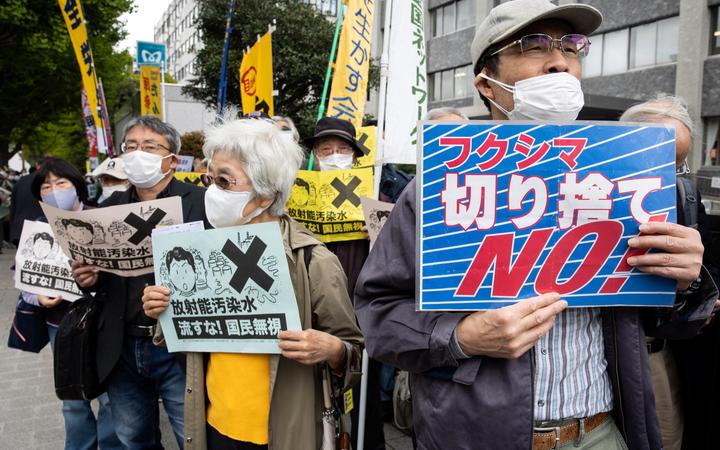 Demonstrators hold slogans during a protest outside the Japanese prime ministers office against the governments plan to release treated water from the Fukushima nuclear plant into the ocean, on April 13, 2021. Photo: Yuki Iwamura / AFP

The Pacific Islands Forum is calling on Japan to re-think plans to dump toxic waste in the ocean.

The Japanese government has announced plans to release treated water from the destroyed Fukushima nuclear power plant into the Pacific.

The Forum's Secretary General, Dame Meg Taylor, said under the provisions of the treaty of Rarotonga, the region's leaders are determined to keep the Blue Pacific free of radioactive waste.

The Fukushima plant was destroyed by a devastating tsunami resulting from an earthquake in March 2011.

Dame Meg said the Forum's view is that Japan has not taken the necessary steps to fully address the potential harm to the Pacific, including possible environmental, health, and economic impacts.

She said the fisheries and oceans resources are critical to our Pacific livelihoods and must be protected.

Dame Meg is urgently calling on the Government of Japan to hold off the conduct of the discharge until further consultations, and an independent expert review is done to the satisfaction of all our members.