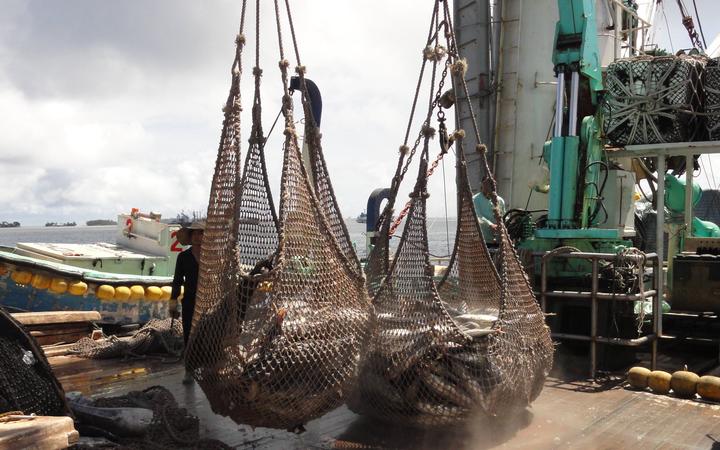 A fisheries initiative has been launched in the Marshall Islands that aims to identify how the western Pacific nation can expand its involvement in the "value chain" of the tuna fishery.

A fisheries initiative has been launched in the Marshall Islands that aims to identify how the western Pacific nation can expand its involvement in the "value chain" of the tuna fishery.

The five-year project, known as FISH4ACP, is European Union-funded and UN Food and Agriculture Organization supported. The Marshall Islands is a member of the EU-assisted Africa, Caribbean and Pacific (ACP) group.

The Marshall Islands project is one of a dozen involving ACP nations around the world, but the only project that was approved for EU funding in the Pacific islands.

"FISH4ACP only operates in the Marshall Islands in the Pacific region," said Gilles van de Walle, global co-ordinator of the FISH4ACP project.

"We have a sister project funded by the Korean government in Kiribati using the same value chain approach but it is a separate project," he said.

Natural Resources and Commerce Minister Sandy Alfred highlighted the significance of this new program as it will seek to identify ways in which the Marshall Islands can expand and develop its involvement in the tuna value chain - which is represented visibly in Majuro by ongoing tuna transshipment activity.

"More can be added, so more should be explored," Alfred said.

Since the mid-2010s, Majuro has turned into the world's busiest tuna transshipment port.

For the five years from 2015 to 2019, Majuro averaged 466 transshipments annually. Covid border restrictions and quarantine requirements hurt these operations, which declined by 60 percent in 2020.

The first year of the new EU-supported project will feature a "rapid assessment" of opportunities related to transshipment, which will inform next steps.

The EU and German cooperation for this global program covering projects - or "value chains" - in 12 countries globally is $57 million over the five years of the project.

"FISH4ACP will be working with stakeholders from 12 value chains across the Pacific, Caribbean and Africa to improve the economic, social and environmental sustainability of operations over the next four years thanks to financial support from the European Union and German cooperation," said van de Walle.

"We are very excited to start operations in the Marshall Islands where we will be working closely with the Marine Resources Authority to increase the domestic value added of the tuna value chain," he said