In brief: Covid-19 news from around the Pacific 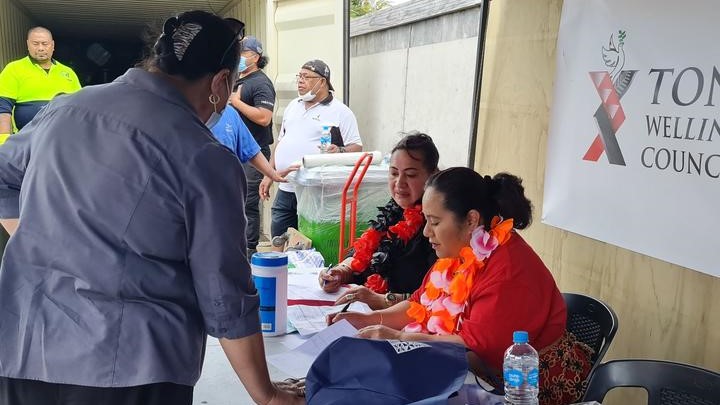 As the list was checked so too were vaccine passes, to ensure everyone's safety from Covid-19, when dropping off and loading. Photo: RNZ Pacific

Exams canned for some Tongan students

The Tongan Government has cancelled national exams for Form 5 students this year.

Prime Minister Hu'akvameiliku Siaosi Sovaleni said the decision had been made to alleviate the pressure on the education system from lockdown restrictions.

Schooling in Tonga has been conducted via radio since the country went into lockdown in early February.

The Samoa government has revealed that four more passengers from Auckland, New Zealand on Sunday March 6 have tested positive for covid-19 after they had their second tests on Wednesday.

The government said one of the four new cases was a close contact of the eight cases identified in the first round of tests after their arrival at Faleolo International airport.

The four have now been transferred to the managed isolation ward at Tupua Tamasese Meaole hospital.

"This has increased the number of positive cases from the flight on Sunday to 12," said the government statement.

All remain well and asymptomatic.

A total of 127 frontline workers were quarantined on Sunday after servicing the flight and all returned negative tests on Thursday.

Cut-off time in Apia for vaccinations

Samoa has set a cut off time of mid-April for giving the Covid-19 vaccination to adults.

TV1Samoa reports the Acting Director General of Health, Tagaloa Robert Thompsen, saying the Ministry is finalising details but next month will mark 12 months since the vaccinations started.

Tagaloa said a lot of time has gone into administering the vaccines but the ministry has a lot of other work to be done.

He said they are now targeting April 14 as the last day for people aged 18 and over to be vaccinated with the AstraZeneca vaccine.

Tagaloa did not say if this will affect the booster shot roll out which is currently awaiting the arrival of a new batch of the vaccine.

This week vaccinations for children aged between five and 11 started with the roll out targeting schools with the Pfizer vaccine donated by the New Zealand government.

Current figures from MOH indicate 89.4 percent of the target population in the 18 and over age group have had both doses and 97.4 percent have only had their first dose.

Isolation ends in New Caledonia for some

Fully vaccinated passengers arriving in New Caledonia no longer have to self-isolate for seven days before going on land.

But non-vaccinated passengers must isolate for seven days and give proof of an exceptional reason for travel plus a Covid-19 test before entering New Caledonia.

It's now been two years since these quarantine measures began because of the Covid-19 pandemic.

572 new cases of Covid-19 have been reported in French Polynesia bringing the total number of active cases to 1,420.

There are 13 people in hospital with two in ICU.

80 percent of the population is fully vaccinated.