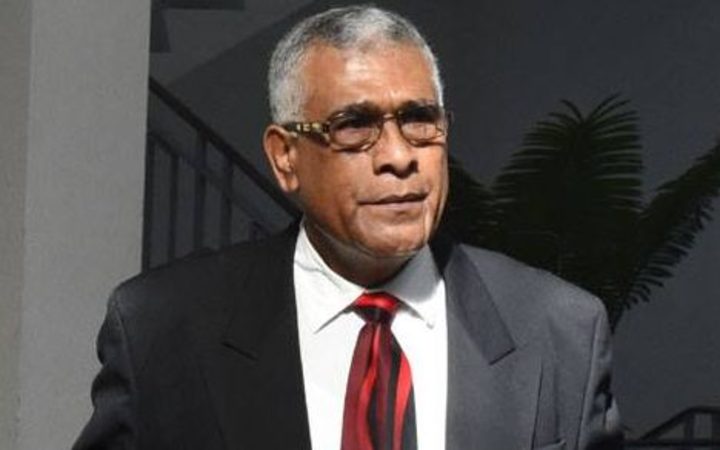 The appointment follows the resignation of former leader of the Social Democratic Liberal Party (SODELPA), Sitiveni Rabuka, from Parliament.

But despite the MP Viliame Gavoka being appointed late last month to replace Rabuka as SODELPA leader, today's vote by the party's members of parliament resulted in Tui Cakau Ratu Naiqama Lalabalavu being appointed Opposition Leader.

The Opposition's second biggest party, the National Federation Party, said it did not have any say on the appointment of the new Opposition leader. NFP leader Professor Biman Prasad said the decision rested with SODELPA because it held the majority number of seats in Parliament.

Opposition Whip Lynda Tabuya said 14 members of SODELPA voted for Ratu Naiqama while five members voted for SODELPA leader Gavoka. Tabuya said she had conducted the meeting so she abstained from the vote.

SODELPA President Ratu Epenisa Cakobau confirmed that Ratu Naiqama, one of three Vice Presidents of the party, had been appointed by the Opposition Caucus to replace Rabuka.

Rabuka had tendered his resignation letter to the Speaker, Ratu Epeli Nailatikau, after delivering his response to the opening address by President Jioji Konrote in Parliament.

In 1999, Ratu Naiqama had succeeded his late father, Ratu Glanville Lalabalavu, as the Tui Cakau or Paramount Chief of the Cakaudrove Province in the north of the country.

Ratu Naiqama was challenged in court by Ratu Epeli Ganilau, son of former President Ratu Sir Penaia Ganilau who had himself held the Tui Cakau title prior to his death in 1993. But in 2001, the Supreme Court ruled in favour of Ratu Naiqama.

Ratu Naiqama began his political career in 1999 as a Lau-Taveuni-Rotuma Open Constituency candidate for the ruling Soqosoqo ni Vakavulewa ni Taukei (SVT) party and was one of only eight SVT candidates to win seats.

He defeated his chiefly rival, Ratu Epeli, of the Christian Democratic Alliance, by 58 percent to 32 percent.

Ratu Naiqama was appointed Minister for Fijian Affairs by George Speight during the 2000 coup d'état.

By the time the 2001 election was held to restore democracy, some major political realignments had taken place.

As a leading member of the Conservative Alliance, a nationalist party which included many supporters and associates of Speight, Ratu Naiqama won the Cakaudrove East Fijian Communal Constituency, one of 23 reserved for ethnic Fijians in the House of Representatives.

In the coalition government that was subsequently formed, Ratu Naiqama was appointed Minister of Lands and Mineral Resources.

The appointment was later criticised by Senator Adi Koila Nailatikau, daughter of former President Ratu Sir Kamisese Mara, who had been deposed in the coup.

Adi Koila, who is the wife of current Speaker Ratu Epeli Nailatikau, had accused Ratu Naiqama of having ordered the burning of the Matailakeba Cane Farm in Seaqaqa (owned by Ratu Mara) during an army mutiny at the Sukanaivalu Barracks in Labasa on 29 July, 2000.

Ratu Naiqama has since called for an overhaul of the country's constitutional institutions. Political authority, he said, should be returned to Fiji's chiefs.

Ratu Naiqama said that since it was the chiefs who ceded Fiji to the United Kingdom in 1874, paramount authority should have been returned to them when independence was granted in 1970.

He also served in the Cabinet of the late Prime Minister Laisenia Qarase, but was forced to resign after being convicted of unlawful assembly and jailed for his actions during the coup.

He was subsequently released under a compulsory supervision order, having served only 11 days of his eight-month sentence.

In February 2006, his nomination for the office of President or Vice-President at the Great Council of Chiefs meeting was opposed.

Following the parliamentary election on 6-13 May that year, Ratu Naiqama regained his Minister for Fijian Affairs portfolio as well as Minister for Lands and Provincial Development.

But he and other members of the government were deposed in December 2006 by the coup led by current Prime Minister Frank Bainimarama.

Ratu Naiqama ran as a candidate for SODELPA in the 2014 election, winning 6668 votes - the sixth highest-polling candidate. He was appointed Shadow Minister for Lands and Mineral Resources after the election.

In May 2015, he was referred to the privileges committee for making derogatory comments about the late Speaker Dr Jiko Luveni at a constituency meeting. Ratu Naiqama was suspended from Parliament for two years.

On 15 July that year, he launched a constitutional challenge against Speaker Luveni and Attorney-General Aiyaz Sayed-Khaiyum over his suspension. The matter was heard by Chief Justice Anthony Gates. The case was argued in September 2015, but the suspension expired before a decision was made by the court.

Ratu Naiqama was elected SODELPA president that year and was re-elected in June 2017.

He had planned to retire from politics, but changed his mind and stood for re-election in the 2018 elections. He was elected, winning 2,165 votes.

In April this year, SODELPA was suspended by the Elections Office over breach of political rules and its constitution. The suspension was lifted 35 days later.

In July, Ratu Naiqama was elected a Vice President of the party alongside another paramount chief and Roko Tui Dreketi Ro Teimumu Kepa and former MP George Shiu Raj.