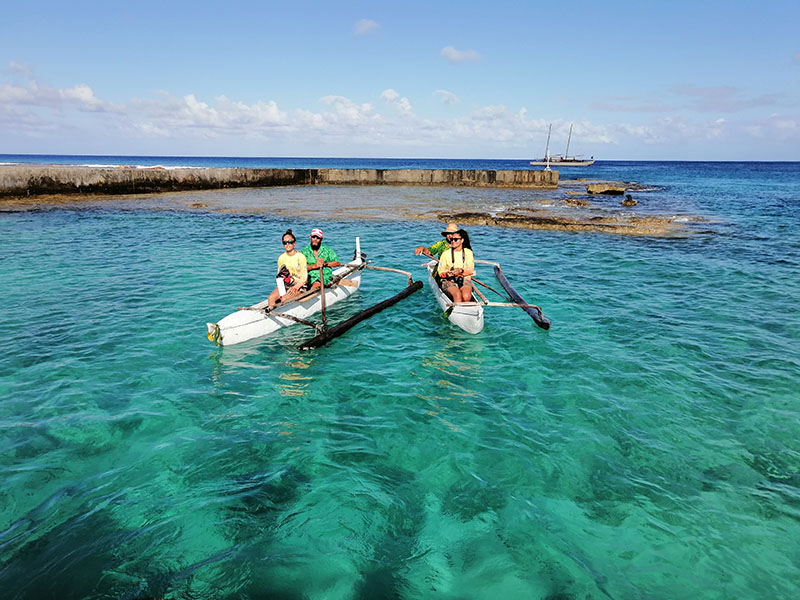 Each island will be remembered for many unique traditions, but one standout was the welcoming ceremony the Tāua e Moana team received from each island.

In Atiu, the team were brought in by barge and welcomed by a pe’e delivered by Apii Enuamanu. MP Rose Brown along with the island council and the two most recent successors to the Ariki titles of Rongomatane and Ngamaru were also present.

In Mitiaro at around 8am, the local fishermen paddled out in their paiere (small one or two-man canoes) and carried us ashore. So, we had to travel light and carefully wrap all electronics before being brought in on Mitiaro’s sustainable fishing fleet.

We were then welcomed onshore with a Kiriti te Maro Tai ceremony, where the arriving visitors from sea are cleansed by stepping over the burning kikau that lies on the ground. The smoke of the kikau is to cleanse the salt from the ocean and any bad omens that may have come from sea. An old practice used throughout the southern group islands.

Mauke’s welcome was also unique. We came in on the barge to be greeted by ura dancing from various spots around the harbour, each dancer accompanied by a young child blowing the conch shell (pu), while the crowd were chanting and singing.

The key purpose of the Tāua e Moana voyage is to deliver ocean health awareness raising messages by the three collaborating organisations.

At every island, each organisation has given presentations to the schools. Te Ipukarea Society has presented on plastic pollution in our ocean and some of the environmental risks we need to better understand with deep sea mining. The Cook Islands Voyaging Society demonstrate some of the safety gear onboard the vaka, how to throw the ropes, and also tie nautical knots. Kōrero ō te Orāu present on island formation, and taramea (crown of thorns) and other sea creatures.

In the evenings, together with Dr Teina Rongo of Kōrero ō te Orāu, we have been giving community presentations on ocean health, including the potential impacts of deep sea mining. It is interesting to note that we have received very consistent responses to our presentations, across every island we have visited both in the northern and southern groups. With some small exception, there is definitely a general agreement from those attending, for the need to take more time to better understand the impacts of mining and to build our local capacity.

Next stop Mangaia, the last of four islands that we will visit in the south. We are likely to spend around three days in Mangaia before sailing back to the capital.  It has been a wonderful experience and opportunity to both share knowledge and learn from our Pa ‘Enua communities.