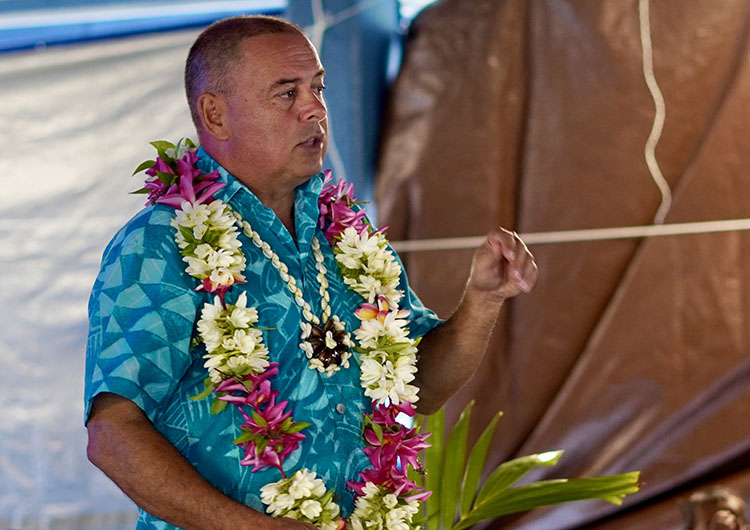 While some of my political opponents are critical of how much we are investing in the Pa Enua, I believe we still need to do more, writes Prime Minister Mark Brown.

Today, as you read this column in the newspaper, I am in Aitutaki for a very special event.

That event is the formal opening and blessing of the Arutanga Harbour Project – a project which has been in the planning and preparation stages for some years now. This is an important project for the future development of Aitutaki and the Cook Islands.

It is fitting that as we acknowledge this project milestone with a ground-breaking ceremony, let us not forget that Aitutaki and our many ekalesia are preparing to host the huge milestone this year of the 200 years since the arrival of Christianity to the Cook Islands next month, an event that many hundreds are expected to attend.

However for our projects, while there is still much work to be done, there is a lot that has already been accomplished.

But works of this nature do not happen overnight. It takes planning over multiple years and budget cycles, it takes scoping and designing to be sure we get what we want, and it takes feasibility studies to determine the costs which are variable and subject to fluctuations. This is the work that we started in 2011 and are now reaping the rewards for being sure and steadfast in our project preparation.

Important amenities like the new ports building and offices, the Aitutaki fishing club and Orongo Park with a new toilet block have been completed. An entire all-of-island plan, Te Papa Tau o Araura, has also been compiled.

All up, just over $2 million has been spent on these works over the past 10 years and we now have a clear programme to improve the Arutanga Harbour channel and basin over the course of the next year, representing a further investment of another $2 million.

This is all a continuation of the broader Orongo master plan developed in 2011. When it was first developed, the multi-year Orongo project was estimated to cost about $15 million. The plan aimed to redevelop the entire area around Arutanga Harbour – the channel, the marina, the terminal and the reserves.

It’s a significant investment – but one which is necessary to help improve and secure Aitutaki’s lifeline to the outside world.

As an island nation, 90 per cent of all our imports come in by sea. We import everything from building supplies, furniture, vehicles, clothes, appliances, parts, and food. As our second most populated island, Aitutaki’s development will require a safe, viable and modernised port to keep up with demand and to keep costs down.

The work we’re about to undertake in Aitutaki will see the entrance to the lagoon widened and deepened. Big ships will still have to unload and load outside the reef, but working the passage will be much safer.

It’s estimated that with our dredging at the entrance and around the wharf area, we will remove about 70,000 cubic metres of sand and mud from the seafloor, which will then be used as fill for extensions to the wharf facilities and for other projects around the island.

The harbour area will also be given a spruce up in the process, improving the environment in the wharf area at the same time.

We have purchased about a million dollars worth of new equipment to carry out this work, and one of the things I’m particularly pleased about is that it will be done by Aitutakians who have undergone training to operate the new machines, and who I understand have proven to be very good operators.

People like my friend Vano Rima, who has come home from Australia, bringing with him the skills and expertise he learnt there from working 50-ton excavators and now putting those skills to use for the benefit of his home island.

The work at Arutanga Harbour is expected to take about 12 months to complete and after that the machinery being used will be moved to other Pa Enua projects to improve their infrastructure. By utilising this machinery and other assets in further work across the Pa Enua, we will be saving our taxpayers several million dollars, while at the same time addressing much needed infrastructure work in the Pa Enua.

Already in this year’s budget is the work to seal and upgrade Manihiki airport and runway, which will help reduce the cost of airfares to the Northern Group and provide greater economic opportunities for our people of Manihiki. Also in the pipeline is the construction of a medical centre on the island of Tongareva, and the improvement to Nassau passage for safety of our people on our islands.

So while some of my political opponents are critical of how much we are investing in the Pa Enua, I believe we still need to do more. All of the above projects and more are contained in our National Infrastructure Investment Plan (NIIP), a guide to our infrastructure investments over the next 10-15 years, which was launched last month.

This plan gives us perspective in terms of what we need to collectively achieve to develop this beautiful nation of ours, from Rarotonga to Aitutaki and throughout all of our Pa Enua.

And as I travel around the Pa Enua I am so proud to see these projects that are being carried out by our own people, for the benefit of our own people – projects delivering world-class infrastructure that we can all be proud of and that will serve not only us but also our tamariki and mokopuna for many more years to come.