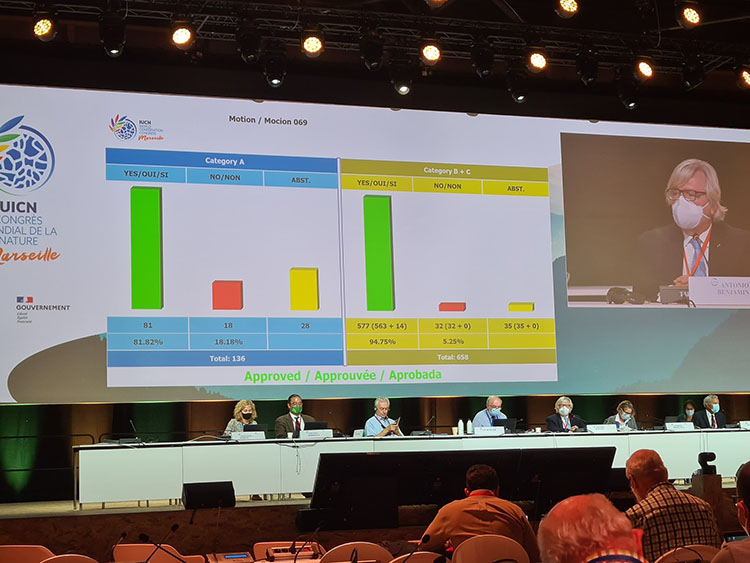 IUCN Congress votes in support of Motion 69 for a moratorium on deep sea mining. SUPPLIED/21091052

The International Union for Conservation of Nature congress have voted in overwhelming support of a moratorium on deep sea mining, with support from 93 per cent of governments and NGOs part of the international group. This sends a very strong message to world leaders of the global concern around the potential environmental impacts of deep sea mining, writes Te Ipukarea Society.

Every four years IUCN convenes the World Conservation Congress (WCC).  This year it is being held in Marseilles, France.  Included in the programme of the Congress is a vote on motions related to conservation issues from around the globe. Once adopted, these motions become part of IUCN policy.

This year, one of the motions called for a moratorium on deep sea mining. This was adopted with overwhelming support at the members assembly this week. Eighty-one governments and government agencies voted in favour of the moratorium, while 18 voted against and 28 abstained. Five hundred and seventy-seven (577) NGOs and civil society organisations also voted in favour, with 32 against and 35 abstained.

This critical vote will inform the IUCN policy in its support of a pause on deep sea mining activities. These activities include the adoption of any regulations for exploitation (mining) and the approval of new exploitation and new exploration licences.

A moratorium is not a ban. It accepts that further scientific and technical research can be undertaken. This vote for a moratorium acknowledges the message that scientists have been giving, that deep-sea mining has the potential to cause large-scale, irreversible biodiversity loss and ecosystem degradation.

A moratorium is also a response to the intense pressure that exists to pursue deep sea mining.

In June this year, Nauru triggered a so-called ‘Two-Year rule’ at the International Seabed Authority (ISA) which it expects will result in the ISA issuing a commercial licence to mine. Climate change is threatening the futures of small island states such as Nauru’s and ours, creating pressure to find income to be self-reliant and fund adaptation measures. There is also the argument that these deep sea metals are needed for the future of green technology.

Unfortunately the pressure of moving to mine in two years falls on the scientists, who are telling us that they do not have enough rigourous scientific evidence yet to support deep sea mining. The pressure also falls on the regulators who are racing the clock to get adequate provisions in place to manage this industry so that it does not have significant negative impacts on our environment.

A moratorium or a pause, helps alleviate this pressure and give everyone more time to fully understand and minimise the environmental, social, cultural and economic risks of deep sea mining so we can make informed decisions.

This vote by the IUCN congress is a good thing for the Cook Islands. If we agree to a pause, we too can ensure the effective protection of our marine environment with the backing of strong scientific evidence, and use this time to build our own local capacity in deep sea science and technology.

We are hopeful that the Cook Islands Government might carry this message of caution and the need for more time, to the next meeting of the ISA where they can oppose any moves to start mining in two years.