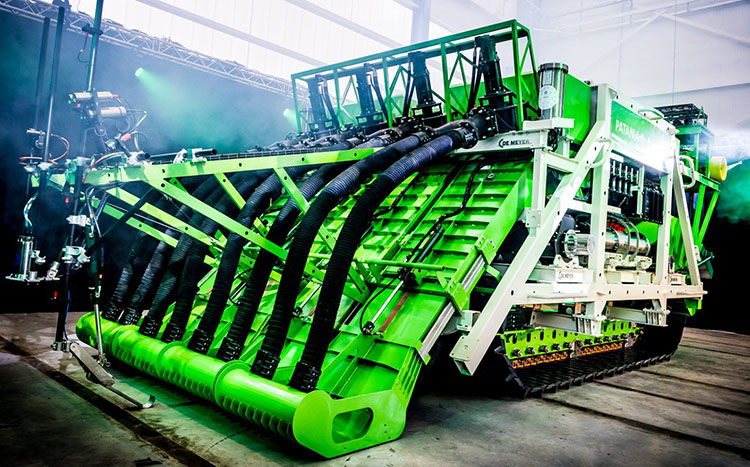 Apart from the very real concern about the environmental impacts of deep-sea mining on our ocean ecosystem, there remains many serious technological difficulties to overcome, writes Te Ipukarea Society.

These have been highlighted this past week when a prototype manganese nodule mining machine, the Patania II, was being tested on the Pacific Ocean floor in the Clarion Clipperton Zone (CCZ) by Global Sea Mineral Resources (GSR).

Á little trivia for you: the Patania II is apparently named after the world’s fastest caterpillar! Wait, they have caterpillar Olympics? Could this be Usain Cobalt?

During the final dive of the trial, the Patania II became separated from the cable connecting it to the surface vessel, the Normand Energy, and the mining machine was left sitting on the ocean bed at a depth of 4500 metres.

On this occasion, according to the GSR website, a recovery attempt of the machine was successful. However, the incident highlights some of the technological difficulties that still need to be overcome.

For example, what would happen if the riser pipe – imagine a giant vacuum cleaner hose –became separated during commercial mining, spewing a massive plume of sediment loaded with toxic heavy metals throughout the various depth layers of the ocean where fish feed?

As well as the risks of derelict mining machinery being left on the sea floor if commercial scale mining does proceed in future.

GSR is the same Belgian company which has a joint venture with the Cook Islands Government for deep sea mining (CIICSR).

This company was formed with the intention of mining both inside Cook Islands waters as well as in international waters of the CCZ. GSR began testing the Patania II earlier this month in the CCZ.

A positive aspect of the testing of the 25-tonne mining robot prototype is that it is being observed by scientists from 29 European institutes, investigating the environmental impacts of mining the deep ocean.

Also on board this voyage is Eusenio Fatialofa, the Cook Islands general manager of the Cook Islands joint venture company, CIICSR.  He should have some good stories to tell about this incident on his return in late May!

This is not the first time that GSR has had problems with the Patania II.  In 2019 the company had to stop the trial of the same machine due to damage caused to the vehicle’s umbilical cable. Eusenio was also on board during those trials.

Te Ipukarea Society believes that technical issues such as these highlight the fact that much more research is needed before any attempt to mine the deep sea on a commercial scale can be considered.

This is why we are supporting the call for a moratorium on starting commercial deep-sea mining, to allow more time for not only the environmental, but also the social and economic risks to be better understood.

A minimum of 10 years would be needed to achieve this, and possibly longer. The European Parliament has also called for a ban on seabed mining until the environmental impacts and risks of disturbing unique deep-sea ecosystems are understood.

According to the GSR website, the scientists on board the vessel are monitoring the mining trial and will report their findings in due course.

GSR have stated publicly that they will only apply for a mining contract if the science shows that, from an environmental and social perspective, the seabed can be a responsible source of the primary metals needed for population growth, urbanisation and clean energy transition.

We can only hope that their definition of environmental and social responsibility matches our own.