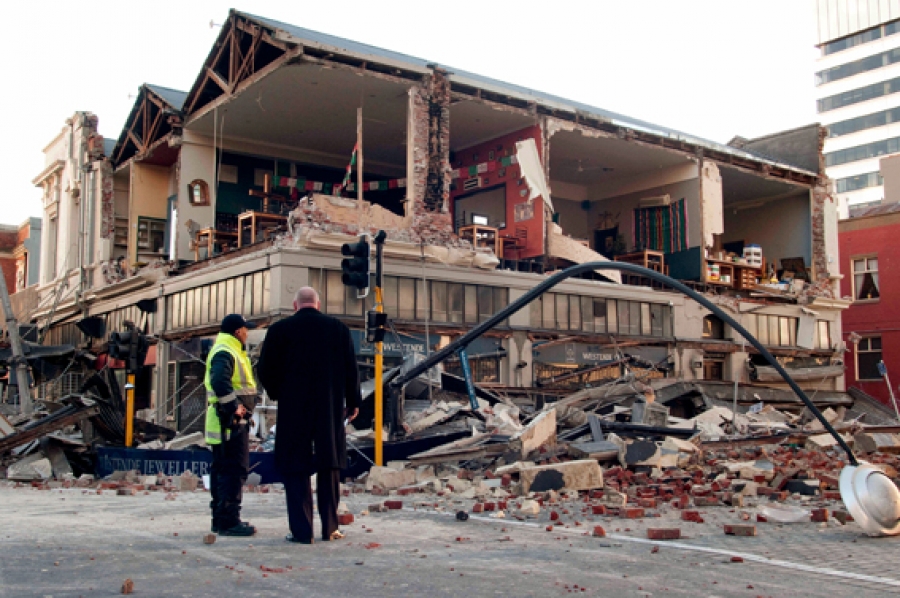 Columnist Ruta Mave had just dropped her children at school when the 6.3-magnitude earthquake shook New Zealand to its core, killing 185 people.

The problem with earthquakes is when you least expect them, expect them.

At 4.35am you least expect to be tossed out of bed by a force of nature, trying to wake the ‘dead to the world’ next to you. “Earthquake” I yell, as I run towards the kid’s room, I catch my 6-year-old as he tumbles from his top bunk, my daughter rides her bed like a rollercoaster laughing, as her father runs towards her. All our lives we’re taught during earthquakes hide under the table or a doorway. In reality my first instinct is to run outside. Then, just as suddenly as it started it stops. Dead, silent, except for the last of the glasses tumbling off the shelf.

With the calm comes conscious thinking, Christchurch was a seismic green zone meaning least likely to have an earthquake, whereas Wellington is a red zone, most likely. My immediate thought is how hard was the Capital hit? It wasn’t, the epicentre was south of Christchurch City, we had minimal impact, we were lucky. Life carried on, others were more affected, especially the older stone buildings that gave Christchurch its unique old English countenance. The cliffs that loomed above the primary school in Redcliffs were intact, all was well.

As the weeks went by, the aftershocks became semi normal – you still didn’t know when to expect one, but a sixth sense developed. You could be talking, then a whole room would hush, and an innate assessment occurs where mind and body braces and ready’s itself. Then at some subconscious level, it’s deduced it’s only a 3-4 magnitude shockwave, so everyone breathes a sigh of relief because we all know ‘you never get out of bed for anything less than a five’.

If you’re at a party we play bingo, the shockwave rumbles and people call out ‘3.2, 3.6, no it’s 4.1’, afterwards we google geonet.com and see the seismic rating, 3.4, I was close. After 12 weeks, you’re more right than wrong. When a size 5 magnitude hits, you’re moving before you’re thinking especially if you’re sleeping. For this reason, I kept all my important documents by my bed, a sweatshirt, slip on shoes and a clear path to the kid’s room. In a new house, two storied, new layout and the father in Canada, I had a plan, two arms, two hands, two kids, I can do this.

February 22, 2011, I take the kids to school across the small park, and let them loose into the swarm of red and white checkered uniforms playing outside. I had some chores in town, then home for lunch, car lined up rear in first, so I can drive out quickly if necessary. I was taking all precautions while flying solo.

I walked out of the kitchen, and was slammed into the wall, the floor came up towards me and the walls leaned in around me, the sound of breaking glass, a roaring growl, the whine of internal structures being squeezed and twisted fill the air. I stumble and slip towards the front door, it’s only a couple of minutes but feels like forever, “shit, shit, shit, shit” I open the door and I can immediately see the cliffs above the school have fallen, they glare red like a fresh open wound, and the dust cloud from the fallen rocks rises thickly – you can’t see the school, you can’t see what you fear the most.

I see the cars but the keys are inside, I grab the kids scooter and hit the road. A car powers up behind me and as it overtakes, the mother flings open the passenger door and shouts ‘shotgun’. I dive like a stuntman into the seat dragging the scooter and door to me, the little park is flooded with liquefaction, the road’s tarseal rips up, we charge up and over, around boulders, burning houses, a rock fall blocks us. She’s out running calling her son’s name.

In the movie, “Saving Private Ryan”, it shows the landing at Normandy with black and white visuals and no sound - just a ratatatat now and then. This is how it is for me.

I see the old people coming out dazed but alive, I see the hysteria on the kids and teachers faces, I see the sea of red and white checks, wearing wide brim sunhats, they’re matching midgets, they all look the same like finding Where’s Wally? I see my son, all of 6 years, standing and scanning, he sees me, he gives me the chin up salute, he doesn’t run to me, just a half grin, and I see the weight of waiting roll off his shoulders. ‘Hi mum’. I hug him, he’s fine, relief slides part way, come let’s find your sister. She’s cuddling with her friends, another shock hits, more rocks fall from the cliff, everyone screams, I wish for my muted movie scene, it’s easier to see and not hear the anguish, the fear, the confusion. What do we do now?

First on the scene, my son said later “it was like a war, with the mums’ running in but instead of guns they all had mobile phones.” We stand with our kids clinging to us, in a circle we look to each other, desperately wanting to run together and hug and cry ourselves.

It’s in our eyes and faces, the memories, the birthday parties, the school gala’s, athletics day, music, ballet classes, play dates and dreams of our community growing up together, us growing old together, no longer exists.

We stand there, we don’t cry, not here, not now, not in front of our kids. We stand, alive, safe, not knowing our futures. Kia Toa.