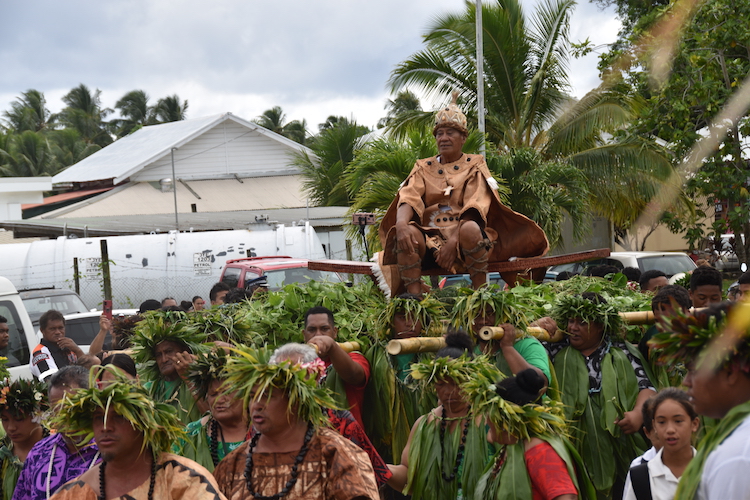 The newly-invested Tamatoa Ariki Teao Tangaroa carried on a paata by the Aitutaki warriors in April this year. MELINA ETCHES/21040804

We have things more to fear than Tangaroa and I would suggest that as Jesus said, the love of money is the core, the essence, and the root of evil – that is what we should be turning back from, writes Thomas Tarurongo Wynne.

It was interesting this week as it’s almost like three stories converged and all around this idea of culture.

Interesting also was a commentary in the Cook Islands News about ‘if we lose our language then we lose our culture’, especially when you consider that probably 84 per cent of anyone who calls themself a Cook Islander is not able to hold a conversation or speak Cook Islands Maori. So where does that leave us, I ask, if that is true?

Our culture and investitures have become contentious and the House of Ariki has stepped in to say that they should be the one that settles disputes. Who is right here?

Is it the choice of the people and Ariki families on their islands and their own culture and way of doing things, or the choice of a constitutionally delegated body that has existed for the past 56 years? Which is when the House of Ariki was constituted and not by an act of culture but rather by an Act of Parliament.

Before 1965 or the past 56 years, there was no such thing as a Kauma Iti, nor a House of Ariki, and when one looks at the history surrounding the decision by then Premier Albert Henry, who was a master politician, he understood that he needed to get the traditional leaders and Ariki on side at the formation of this new self-governing country, and that they needed to be a part of what he had planned for the Cook Islands going forward.

As we separated ourselves from our colonial masters, Ariki needing a place in our society was clear, and especially if one considers what Colonel (Walter Edward) Gudgeon was able to do and diminish their power in such a short space of time.

So, one has to ask the question, does thousands of years of Pe’u Maori by each island decide, or a legally constituted body that has only existed for the last 56 years.

Disagreement is not something we should be surprised about, nor should we be surprised that some people decide that it should be them as opposed to someone else? Because our history through the Pacific is littered with people who have assumed power and have confronted other powers and battles have ensued, or some have literally picked up their lives, and wives, and voyaged somewhere else.

Tangiia is a good example, as he was pursued by his brother Tutapu and then, vanquished his brother here in Rarotonga. Ripping out his eyes, placing his head in an oven and calling that place Matavera.

What this dispute clearly shows is that in fact we are not a country. We are instead 15 federated states, 15 islands with 15 origin stories with 15 Ariki, Mataiapo and Rangatira investitures that were chosen and decided upon in their own ways. Different and separate to each other – sometimes similar – but each had the authority to choose for themselves.

If you ever want to see these 15 separate island states then propose to interfere or interrupt their own way of doing things and see the response. On Facebook and social media, that message has been consistent – you have no place to tell us what to do. We have always done it this way, and we will continue to decide for ourselves how it should be done.

Do we take the view that when we lose our language, we lose our culture, because language is critical to culture or colonials would not have worked so hard to extinguish it and by that try to extinguish indigenous peoples? What they did not realise is that we were more resilient then the savages they thought we were. Or do we take the position of an Evangelical Church that we need to repent from worshipping culture and Tangaroa and instead turn back to God?

My position is we have things more to fear than Tangaroa and I would suggest that as Jesus said, the love of money is the core, the essence, and the root of evil – that is what we should be turning back from.

That the worship of money, of wealth accumulation and the evil that flows from its roots to the branches of people’s lives is an evil worth confronting and not a dead god and idol that has simply become an icon of a time long past.

A very well written piece Mr Wynne, the feedback will be interesting.