OPINION: ‘New Zealand Maori owe their heritage to us’ 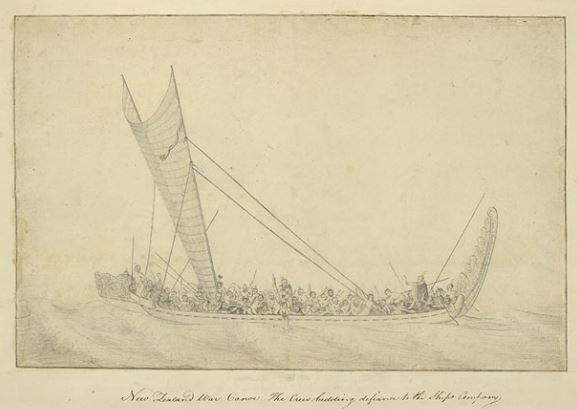 This double canoe was sketched off the New Zealand coast in 1769 by Herman Spöring. Photo: BRITISH LIBRARY BOARD. 21020702

There's a reason why a lot of New Zealand Maori say they fell like they're at home when in Rarotonga - because they are. Ruta Tangiiau Mave writes.

Behind the large wooden gates on the fringe of Muri, tourists have followed the beat of the drums to the kikau thatched wooden are, where inside the museum display of cultural artefacts, vakas, maps and photos grace the back wall.

While a guide weaves them through a journey of flight, fight and voyaging encapsulating the arrival of Tongaiti and Karika, Blackbirders and Missionaries and enlightening the captured audience, New Zealand Maori owe their heritage to us here in Rarotonga, we are their tuakana, metua, parents and they are our tamariki, not the other way round.

It’s at this point eyes widen, jaws drop and heads turn to each other and question: “Did you know that?”.

For the past seven years I’ve been the history guide at Te Vara Nui, with 240 guests per week.

That’s about 5000 per year, 35,000 in my time, teaching predominantly Kiwis, who, for most of them, learn for the first time the Great Migration orated by New Zealand Maori who left Rarotonga.

More, the names of those vaka became names of New Zealand Maori tribes, like Tainui, Aotea, Te Arawa and Takitumu.

They learn originally, 20 vaka left, 10 we lost track of, one returned, one landed in Society Islands, one on Easter Island.

History says they all left together, which, if true, was an amazing feat, when a vaka took years to build, carved from the mighty mahogany trees and carried a good 100 - 150 people, food and animals.

The migrations happened between 1000 and 1400AD, so chances are some of the ones we lost, landed uncharted and undocumented at Aotearoa.

The next question most commonly asked is how did (from their impression) a culture lovely and friendly in Rarotonga, become the strong and warrior culture of New Zealand Maori?

My unqualified answer is, knowing the journey ahead, was huge with challenges, you’d have to be an alpha personality, have a strong, muscular physique with a good store of fat to handle the oars and withstand the cold temperatures of wind, rain and storms, with very little protection to even get in the vaka.

Then when you arrived, find limited trees offering fruit, an unsympathetic climate and nothing you are used to.

Evolution depends on survival of the fittest, and survive is what they had to do.

There’s no doubt in my mind this DNA necessity was passed on from generation to generation.

A large number of New Zealand Maori come to Rarotonga saying: “It’s like coming home”, because it is, they didn’t realise because it’s never been part of their school curriculum or marae.

So many are Tainui, a large iwi, who sit in the History Hut never knowing. It’s surprising and sad.

My experience growing up in South Auckland was one not of companionable cousins but treated as a complete outsider by New Zealand Maori. I’d like to think it has changed, but I’m not convinced it has.

One night a group of urban New Zealand Maori sat at the dining tables and after I’d done a welcome to all the guests by country especially ‘Kiwis’ welcoming them home.

I was intrigued when they said, “You didn’t mention our country?”.

Seeing an opportunity to educate, I elaborated, “okay if you’re from New Zealand then you know you come from here right?”.

“No, we come from Hawaiki”, “Hmmmm, okay and where is Hawaiki?”, now they start floundering it’s somewhere and they wave north east which if you’re standing in New Zealand would put you around about here, in Rarotonga.

So, I asked “What does Hawaiki mean?”, they didn’t know, it was just somewhere they came from.

I continued, “You know we come from a place called Avaiki, it’s the same place and it means ‘from somewhere else’, because we all know we didn’t originate from this here and now, we all know we arrived by voyaging across the oceans. In fact, all the islands have the same name, with different spelling.  You my friends are descendants from vakas that left Rarotonga, we are your ancestors, legit, it’s documented, read and accept you’re Polynesians”.

The look on their faces was priceless, but as they sat staring at Google search, their eyes widened and their mouths dropped like the many others who learn more about their history here, than growing up in New Zealand.

I’ve suggested to Tourism this potential niche market for attracting Kiwis to the Cook Islands, and after Jacinda Ardern announced at the Waitangi celebrations her support for more Maori history, I hope they include, before the arrival of the Europeans and look at their Polynesian roots and encourage them to come home and find their vaka.

So long as they realise if they come to claim land, then, sorry, too late, it’s all gone!

May I suggest a new book released in Aotearoa New Zealand last year called Sea people The puzzle of Polynesia by Christina Thompson and it is an enlightening read for your museum guides and plenty of the latest up to date info of Polynesian migration throughout the Pacific ocean. Geoff Lye Christchurch New Zealand. Ps I was in Rarotonga in 1980 and I sure miss the place.

Tena koutou katoa, I really enjoyed this article and tautoko everything that was highlighted by the author. My personal insight on this subject has been an evolving journey spanning many years. I was lucky enough to have an auntie who married a Rarotongan when I was very young and he used to always say " Georgie, we are all one people " and being too young to understand, didn't think too much about it.... I was taught by my grand-parents that our people had migrated here to Aotearoa from a place called "Hawaiiki " through many places to establish our kainga and taonga tuku iho which over time has evolved into what we have today. So...with time has come progress and with that comes technology and what I have found out personally from Ancestory DNA came as no surprise to me as the oratory history handed down to me was bang on. HAWAII, TAHITI, RAROTONGA, AOTEAROA!!! Two years ago when I first visited Raro with my Whanau I too strongly felt I had come home...I felt the same way when I went to Tahiti and Hawaii. To me, I felt an immediate connection with the people, the language, kai and an overwhelming spiritual emotional connection which confirmed to me exactly what my Raro Uncle said to me years ago " We are one People" So, taking that literally, no more long queues in the tourist lane at the airport for me....I'm just home for a visit and its the local lane from now on.... Oh and yeah, next time you NZ Maori's call our Polynesian whanau " COCONUTS" you better include youself in that!!!

As evidence at Te Hono ki Rarotonga, Tokomaru Bay marae, revered tipuna of both the Ngati Porou (East Coast iwi) and people of Mauke, rides the proud Paikea on his faithful whale (whose name escapes me presently), looking longingly toward his homeland, Mauke. The haka performed proudly by Ngati Porou, is aptly named, Paikea. The article stating Maori are not aware of their Cook Islands history is possibly a generalisation.