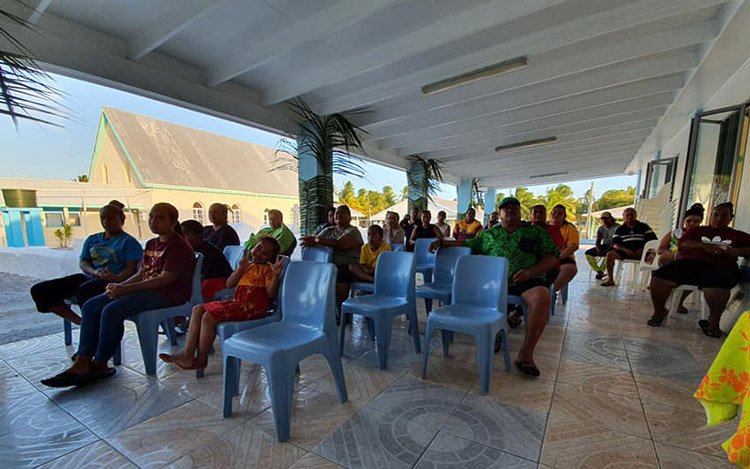 There appears to be strong community support for building the capacity of locals to better prepare them to make decisions regarding deep sea mining, writes Te Ipukarea Society.

The Tāua e Moana vaka voyage has now arrived at the fourth Northern Group island of Pukapuka having made a small deviation from its scheduled arrival in Nassau, due to high winds.

The voyage is delivering a message of Ocean Health to the Pa Enua Tokerau. Equally important is the opportunity to learn from those communities about their knowledge and concerns regarding the Moana Nui o Kiva.

We thought it would be a good time to check in with our voyagers to ask them what messages are coming from the Northern Group communities about deep sea mining in the Cook Islands.

Dr Rongo has also been undertaking interviews of older people on the islands, seeking their views on a range of issues, including deep sea mining.

Here is TIS technical director, Kelvin Passfield’s feedback on what has been the response so far:

In Tongareva, public presentations were given to both the Omoka and Tetautua communities on June 30 and July 1.  After the presentation in Tetautua, five community members indicated strong support for taking between 10 and 20 years before considering whether to begin deep sea mining.

This was a similar response to that from the Omoka community where a lot of discussion was generated, with eight members of the community making a statement in support of the idea of not rushing ahead with this activity, until much more deep-sea research has been done on what life there is in our depths and the risks to our ocean’s health are better understood.

Not one person suggested that we should be moving quickly to get commercial mining underway. Moving to Rakahanga, a good turn out of about 25 people came to our presentation at Vaingako community hall on July 9 and it was well received.  We were told it was easy to understand the message being given.  There was general agreement among those present that more time was needed to allow for more independent research to take place.

There appears to be strong community support for building the capacity of locals to better prepare them to make decisions.  Particularly the need to upskill our own people in the area of deep sea ecology and in mining technology before making a decision on whether to proceed or not with commercial seabed mining.

Waiting for changes in technology may also mean we no longer need to mine, or that better machines are developed which are less damaging to our deep sea ecosystem.

Next was Manihiki.  We held our ocean health session at 5.30 pm at the Ebenezer Hall on July 13. A good crowd of over 30 people turned up, considering what a big day they had with the patia!  Again, there were some good questions and comments.

In Manihiki as in other islands, there was a lot of support for building the capacity of our young ones over the next 10 to 20 years in the science field to allow the Cook Islands to make better informed decisions about whether we should start deep sea mining in the future or not.

We left Tauhunu, we had a quick trip to Nassau, arriving at 10am on Thursday morning July 15.  There were big swells and strong winds, and we were advised by those in Nassau that it was too dangerous to land.

So we decided to carry on to Pukapuka. Again a quick trip, and we were at the passage through the reef by 6pm. The vaka was moored just outside the reef, and those that had a shore-based programme, including TIS and KO, went ashore by barge.

Our ocean health programme started at the school at 9am yesterday with the public meeting at 7pm.

In every island, TIS and KO have been sharing bilingual brochures entitled “Ocean Health is Our Ocean Wealth”.

These are available on our webpage www.tiscookislands.org.