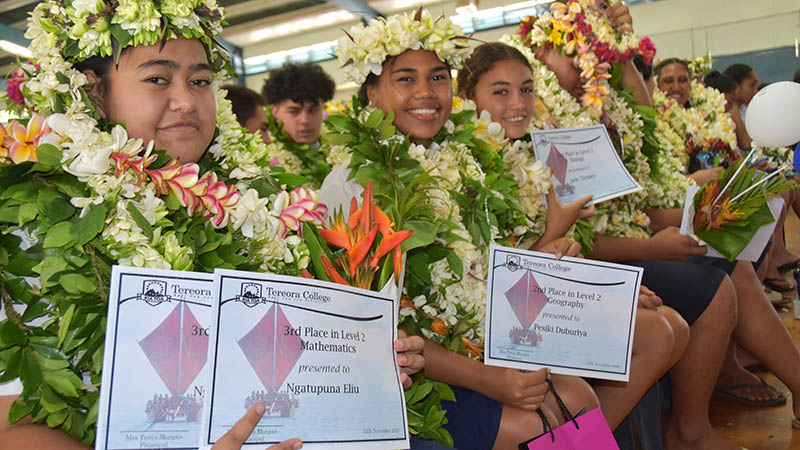 Our prize giving ceremonies are beautiful; loving students hug and kiss presenters, each other, and in some cases dance to the live drums.

It had been a particularly hot day teaching kids’ athletics at primary schools, training youth athletes on track and coaching adults to become athletic coaches last week. It was dark, dinner still to be made and as I get home, my son says “Do you have my ei’s for tomorrow’s prizegiving?” I close my eyes, “Ei’s? aye, yay, yay…. Nah!” Then he says “Mum, did you know this is the first year Meme hasn’t been here for my school prizegiving?”. “Yes, son, I know…” He grins and raises his chin and eyebrows, and in that moment of realisation, the sword of honour he has bestowed on me felt like it’s stuck in stone!

Covid-19 has kept Aunty and Uncle off the island, which means loss of daily contact, support, Aunty’s date scones and me stepping up into the important ei making role. I always make ei’s for my kids, it’s just they’re ‘stink’ in size and number when lined up with the overflowing garlands. The ei katu’s produced by Aunty and friends is full of laughing, talking and sewing the night before. Uncle starts selecting flowers two to three days ahead, getting the buds early so they open fresh on the day, and before the trees are stripped bare from the many trolling the roads looking for the same.

Sitting watching Tereora school prizegiving, is a far cry from the formal staid prizegiving I attended in Auckland last year for my daughter. I was the only one wearing clothes with colour, most of the parents wore black, dark suits for business. There were quiet murmurs, and no children. Clapping was only allowed at the end of all announcements, as the students file quietly back to their seats. I was the only one going “whoohoo! Go April!” and sashaying down the aisle wearing my ei katu, to adorn her with flower and lollie ei’s. She won a Polynesian scholarship to attend Otago University, so it was important for us to recognise and showcase our Cook Island traditions, despite the rules.

Here, there is colour, noise, laughter, buzz and the smell of hothouse flowers is overwhelming.  A sea of of ei's stream in with parents and friends in plastic bags and boxes, they have all helped the harvesting and gathering flowers, buds, and rauti for holding, stripping and sorting.  They’re not simple strings of one bud after another, these are individual works of art. They’re creative, inventive, handcrafted with hours of time, focus and love. Mamas gathered around tables long into the night with needle and threads, choosing the perfect colours, size and shapes.  No one uses an old flower, they are all perfect, hundreds threaded in a design of love. Three tipani, four tiare maori, three bougainvilia, four tiare taina, two orchid, rauti, repeat, repeat, repeat.

Our prize giving ceremonies are beautiful, loving, students hug and kiss presenters, each other, and in some cases dance to the live drums. There is passionate ring side announcing from the MC, the crowd erupts with applause clapping, dancing and cheering. The students are smothered beneath the many garlands, others race to them, to add more, to take off their own and put them on others. It’s a hay fever sufferer’s nightmare.

Petals are strewn around the floor, emotions are high, butts are numb despite the process moving faster than in other years. It’s okay to get up and move around the room, to cat call from the stands, others laugh, shake their heads, everyone nods and sits waiting. When it’s over, the intricacies of the designs wilt, but it hasn’t been a wasted effort, it’s an art for art’s sake.