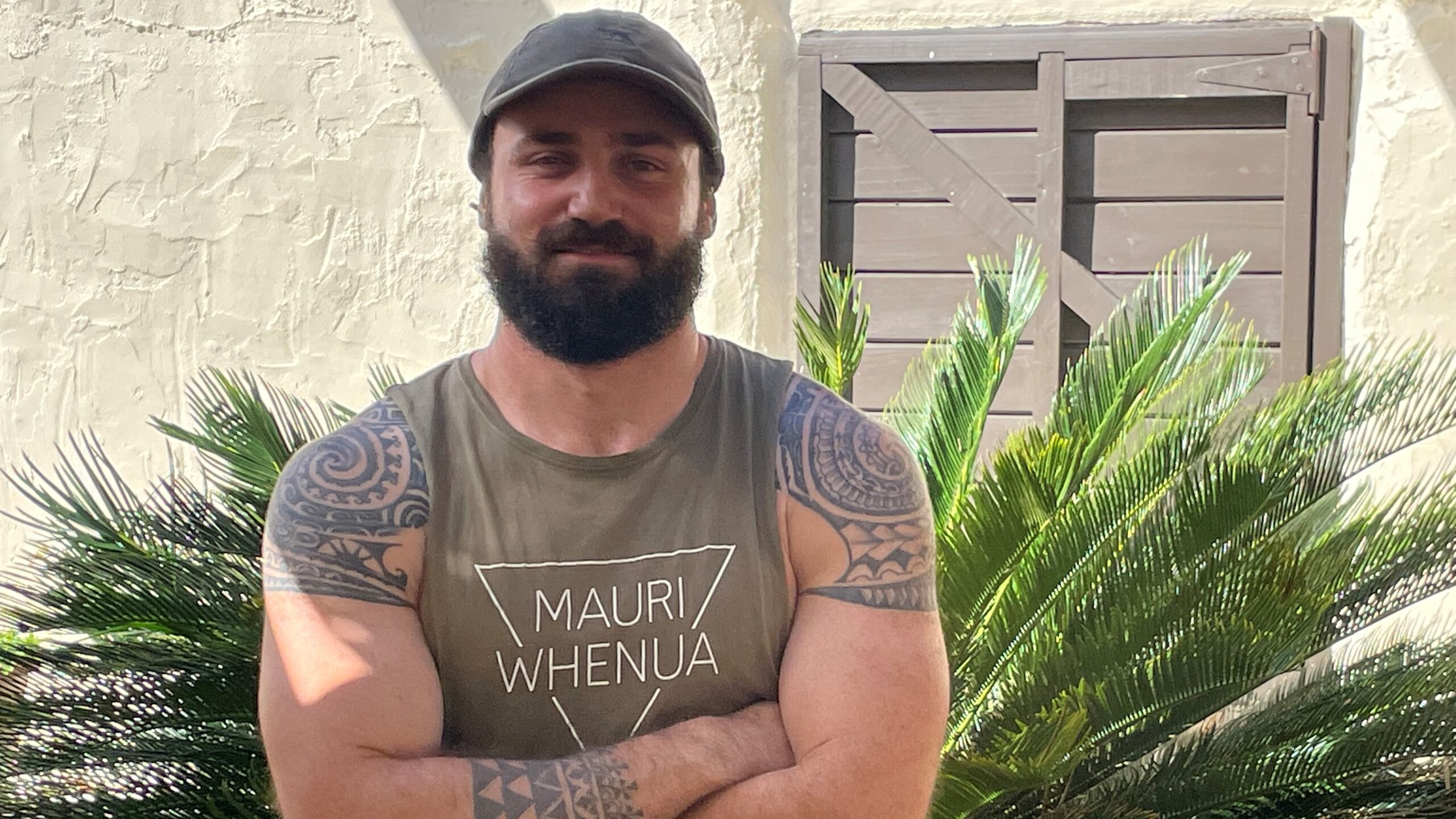 Many people, places and items continue to sail through life comfortably with two or more names, with some names taking prominence over others depending on the time and context. The question is, could we also sail our nation under two different names? By Liam Kokaua.

I was born in Aotearoa, and collectively raised by my mother, grandmother Moari (Maureen) Hilyard (nee Kokaua), as well as her parents – my tupuna tāne, Roinga “Taiti” Kokaua and my tupuna vahine Jane Marsters. I was born without our Māori language, a common reality amongst our 80,000 people who live here. However I have spent half my life learning to speak our reo and now take every opportunity to help teach others who themselves are on the same journey.

I was raised exclusively by my Kokaua family. Yet not many people know I only legally changed my last name to Kokaua about 10 years ago. The name I carried, Hilyard, came from my maternal grandfather, an Australian Papaʻā who I have never met. At the time, I was about to graduate from university. It was an easy decision that the name of the family who raised me needed to be on the certificate I had worked so hard for.

Over the previous years I had immersed myself in learning my Māori papaʻanga and reo and I believed it was time to carry my maternal grandmother’s maiden name. In changing my name I also acknowledged my Pāpā Taiti and the love he showed me growing up.

I changed my name to something which better reflected my identity, my growth as an individual, and to be honest I changed it to a name I believe I had earned.

Our ancestors have always changed names. Not only for people but the names of vaka, villages, and islands. For many of our islands they have a physical name (such as Rarotonga) and a spiritual name (Tumu-te-varovaro). Some people change names when grieving the death of a loved one, getting married, or other significant events.

For example, the name Kokaua itself was given by Makea Takau to my ancestor Apainga in his adulthood. In full it was Te Ariki Koka ʻua o Ngāmaru Ariki. The name commemorated Takau’s husband who used to travel frequently between Rarotonga, Atiu and Tahiti. After being shortened to “Kokaua”, the new name stuck, as they often do within our communities. The vaka Tākitumu was also known as Te Tika a Te Tuaʻine, in acknowledgement of Tangiʻia’s sister. In fact, many people, places and items continue to sail through life comfortably with two or more names, with some names taking prominence over others depending on the time and context.

The question is, could we also sail our nation under two different names?

In March 2019, our national name change debate gained international attention, featuring on news platforms such as the New York Times and The Guardian. It was probably the most attention our nation has ever received. It seemed like we were on the cusp of something exciting and new for our nation, and though it has simmered, the fire for change has not gone out.

Many of our people still do not currently feel that the name Cook Islands represents us. James Cook only ever made two brief visits to our islands. He merely stepped foot on one island – Palmerston, which was uninhabited at the time. Like my own story with my grandfather, some of our Māori people rightfully do not feel a connection to an English explorer from the 1700s.

For this reason, many over the years, including myself, have been promoting Indigenous terms for our nation in an attempt to normalise their use, but we often revert back to “The Cook Islands” because that’s our officially recognised name. Perhaps it is time to take a stronger approach to decolonise our national identity as well as our cultural identity as Māori. Change begins with us showing others that things can be done a different way. We must put into practice a new name for our nation if we want this change to occur, whether it is legally recognised or not.

The name I believe our nation has earned, and the one I would choose to sit alongside the Cook Islands is ʻAvaiki Nui.

This was the name unsuccessfully proposed in a national referendum in 1994 by then Prime Minister Sir Geoffrey Henry. At the time, a significant 30 per cent of the nation supported the change to ʻAvaiki Nui. If you are unaware of the significance of this name – this is a good place to start your own research.

Sir Geoffrey Henry advocated for the name change, however he would not have done this in isolation. He would have consulted with the knowledge holders of his time and he would not have progressed to advocating for the referendum without prior knowledge that there was existing support for this name. This shows that our people had been thinking about changing the national name long before this time.

In 1900, when the New Zealand government chose to refer to their newly acquired territory as “The Cook Islands”, our people didn’t have the ability to influence their decision, or advocate for an Indigenous name. Yet today, 122 years later, we now have the agency to do so.

ʻAvaiki shares several linguistic cognates (words with the same linguistic origins), such as the names of the islands of Savaiʻi, Hawaiʻi and Havaiʻi (Raʻiātea), and the Hawaiki of Aotearoa Māori.

This does not mean we are claiming to be the homeland of other Indigenous groups in Te Moana Nui o Kiva. Simply put, we are the homeland for our own people, the 90 per cent of our Māori people who now live in other countries outside of ʻAvaiki Nui.

Our traditions state that Rarotonga, was once known as ʻAvaiki Raro, and in ancient history it was physically situated beside its sister island ʻAvaiki Runga (Raʻiātea). After a dispute, the three atua Tangaroa, Tūtavake and Koro (ʻOro in Tahiti) uplifted the island and moved it to its current position “raro” (leeward – West in this case) and “tonga” (to the South), hence the island’s current name.

Both the Rarotongan and Raʻiātean histories agree on this, which can be found in the accounts of John Williams. Whether you believe the island could be lifted or not, the truth of this oral tradition may be that it refers to a historic migration of people from Raʻiātea to Rarotonga in early history.

With the addition of 14 more islands due to colonisation during the late 19th century, we have expanded into a new form, with Rarotonga exerting more political influence on the Pā ʻEnua where traditionally it did not. At the same time, Rarotonga has been transformed culturally and genealogically by migrations from the Pā ʻEnua over the past 200 years. My question therefore is, do we need a new name to reflect these changes and these larger and more sustained networks within our iti tangata? This is important as we grow beyond the figure of 100,000 Māori people that identify as “Cook Islanders” globally.

By dropping the old, redundant term of “Raro” off ʻAvaiki Raro, and adding “Nui” (great, vast) to include all 15 of our islands, I believe ʻAvaiki Nui (our Great and Vast Homeland) captures the evolution of our nation of islands better than any other name.

We are not alone

More than 70 other countries have undergone this same name change process, with many more now starting the journey. Many nations now seek to pave a way for the future for their people by paying tribute to their own Indigenous wisdom and cultural pride and not names given to them by their colonisers. Let us look at our closest relatives first:

Perhaps the best example of a nation sailing with two names is Aotearoa New Zealand. This is despite Aotearoa not being recognised as an official name. However the country currently has a petition in parliament to officially change its national name to Aotearoa, led by the Māori Party, with many others demonstrating proactive efforts such as artist-activist “The Hori”.

In French Polynesia, the pro-independence movement, led by former president Oscar Temaru, as well as the nation’s main religious organisation, Etaretia Porotetani Māʻohi, are calling for a name change to Māʻohi Nui.

Now to our Pacific neighbours. Tuvalu, formerly known as Ellis Islands, changed its name in 1978. Vanuatu, formerly known as New Hebrides, changed its name in 1980. Dozens of other countries around the world have changed their names in the last century (for example Holland to the Netherlands, Siam to Thailand, Burma to Myanmar, and Ceylon to Sri Lanka), with Turkey changing its name back to Türkiye in 2022. What is in common with all these name changes, is that these countries decided that their previous names no longer reflected their cultural identity, or their growth as a nation. So why not us?

Is it time to add ʻAvaiki Nui to sit beside The Cook Islands so that we may sail towards the future with both?