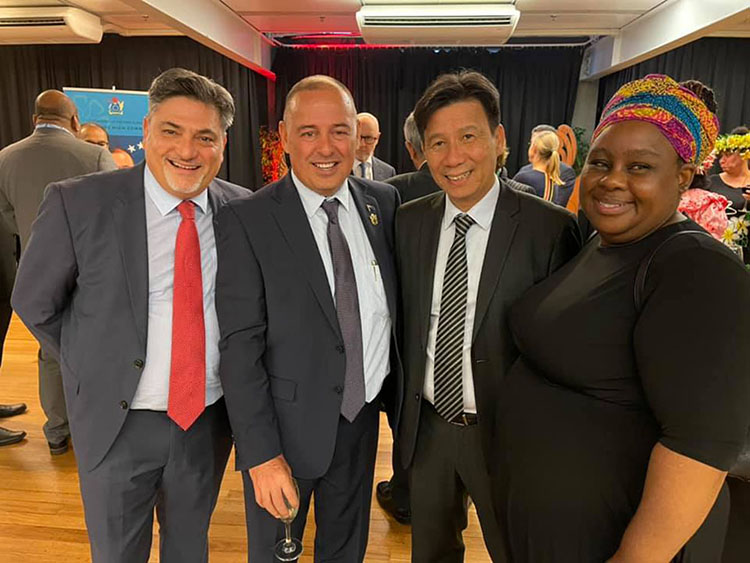 Ambassadors and diplomats from various countries based in Wellington, New Zealand had the opportunity to meet Prime Minister Mark Brown at a special event earlier this week.

The reception at the Wharekawa Centre hosted by the Cook Islands High Commission to New Zealand brought together ambassadors and diplomats from partnering countries.

Yesterday, Brown, who is on his first official visit to NZ after taking prime ministership last year, had his pre-departure Covid-19 testing in preparation for his return this Friday.

Earlier this week, he met with senior officials at the Reserve Bank of New Zealand.

In lead up to the meeting, Brown said they would be talking about some solutions and ways the Reserve Bank could assist the people “to protect people’s assets and to help banks in the Cook Islands to make sure people’s properties are secured”.

He also met with New Zealand’s Deputy PM Grant Robertson who is also the Minister for Finance. Brown said they were able to discuss some solutions as well as to how New Zealand could help the Cook Islands through this year of Covid “in anticipation of us getting back into business.”

He and his delegation also met with the Minister of Foreign Affairs Nanaia Mahuta who is responsible for New Zealand’s support programme to the Pacific Islands including the Cook Islands.

Brown says they discussed some areas the Cook Islands government believes New Zealand could help the country “particularly the investment that government is doing in infrastructure development”.

“This is going to be very necessary for us, as we look at ways to keep our private sector occupied and stimulated as we try to get our tourism industry on the road to recovery.”