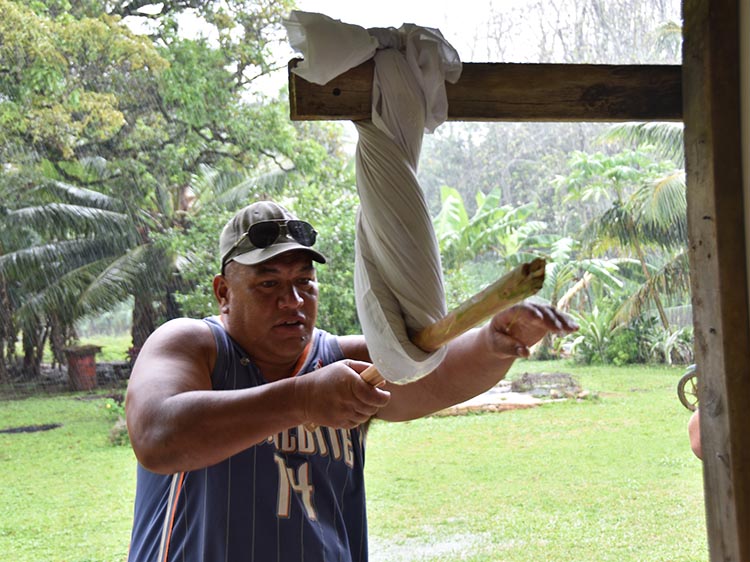 Tuakana Samuel pictured last month squeezing coconut cream for the making of coconut oil at the ‘White House’ in Mauke. 20122019

The island of Mauke and the families of 49-year-old Tuakana Samuel are reeling from the sudden shock of his passing over the weekend.

Residents of the island gathered at the airport to meet the Air Rarotonga chartered flight on Saturday afternoon that was dispatched to return Samuel to Rarotonga.

Samuel was born and raised in Matavera to parents Vainetutai Samuel (nee Atera) and the late Upokoina Samuel.

He moved to Mauke two years ago for a fresh re-start in life, and to utilise his skill and love of planting with the island’s fertile soil.

Sisters Joanne Stevens, Ngavaine Makitai and Tupuna Mo’o - ladies of the “White House” in Mauke, are devastated at the loss of their dear friend.

“Tuakana has been like a brother to us, anything we have asked him to do for us sisters he would always deliver… he built our clothes line, and anything that was broken in the house he would fix,” said Stevens.

An experienced and avid planter, he had great ideas about agriculture and successful crops for the island in the years looking ahead.

“He would visit often for a coffee and a chat. We will dearly miss his presence and his sense of humour,” said Stevens.

“Such a great guy, a man with such a passion for planting.”

Samuel had planted a large crop of pineapples, with a vision to expand his plantations next year; his watermelon plots will be ready to harvest in February.

Mauke’s Chief Executive Officer Royston Jones said it appeared Samuel had passed away in his sleep at home; he was discovered on Saturday morning.

Funeral arrangements are yet to be announced.

Condolences go out to his families and friends and the people of Akatokamanava.