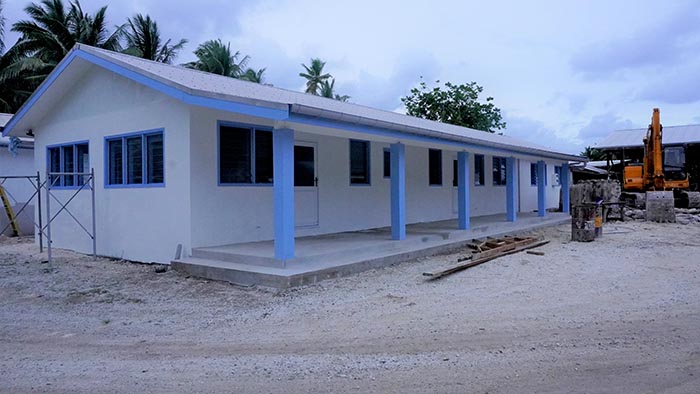 With a new hospital in the final stages of completion, Pukapuka’s leaders now hope they can lure a qualified doctor to improve the quality of healthcare available on the island.

Finishing touches are being made to Pukapuka’s new hospital, which is expected to begin serving island residents in early 2021.

The new facilities will include dedicated wards for men and women, a maternity ward, a dental office, administrative offices, and a storeroom.

Construction commenced in May this year, and has been led by Rarotonga-based builder Ripa (Kainana) who is originally from the northern group island, as well as staff from the Cook Islands Investment Corporation.

A team of roughly 30 labourers also assisted with construction.

“Progress has been fantastic, it’s been going well,” said Pukapuka mayor Levi Walewaoa. “We work as a community.”

Upon completion, the hospital will provide services out of the two adjacent buildings, which will service the resident population of roughly 450.

Walewaoa said elected officials from the island will also be procuring new equipment such as hospital beds for the new facilities.

Pukapuka’s existing hospital was constructed roughly 60 years ago from limestone and concrete. The new facilities will provide approximately 25 per cent more space.

Due to Pukapuka’s isolated location and the status of the existing facilities, many patients previously had to be referred to Rarotonga for treatment.

Government officials hope the new hospital will be able to provide services that had previously been lacking on the atoll.

Healthcare needs are currently served by a nurse and one dentist, who stay on the island for a limited term before being replaced.

Walewaoa said he hoped to have more permanent staff once the facilities are opened.

“We need a qualified doctor for our population over here,” he said.

“Pukapuka has the highest population of the northern group islands, we have nearly 500 people now, and by the end of next year it will reach 600, so we need a qualified doctor.”