Saturday 29 May 2021 | Written by Supplied | Published in National, Outer Islands 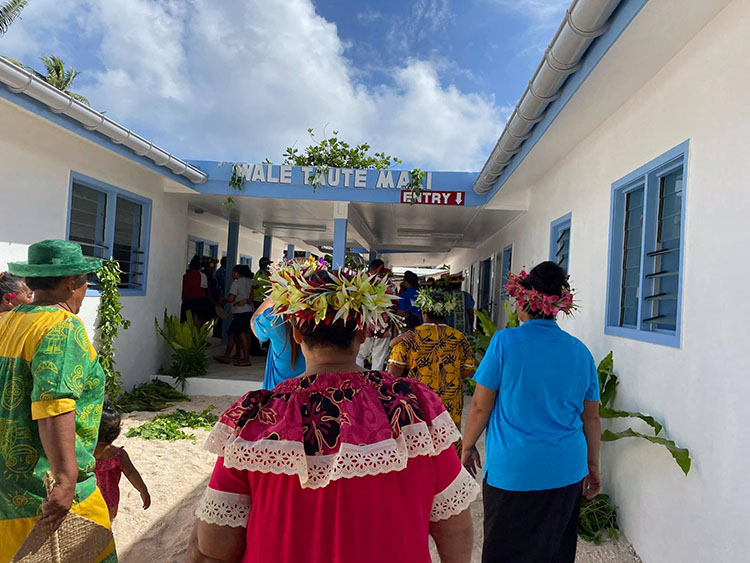 The people of Pukapuka check out their new hospital during the opening ceremony on February. KO TINGA/21052831

Secretary of Health Bob Williams says he is pleased to see the difference the newly extended and refurbished Pukapuka Hospital has made to the island’s healthcare services.

“The completion of this project was of vital importance to the healthcare of our people on both Pukapuka and Nassau,” said Secretary Williams in a statement.

“The standard of care we are able to deliver them has now been raised substantially.”

While the new Pukapuka Hospital was officially opened by Prime Minister Mark Brown on his Northern Group mission in early February, at that time there was still some tiling work and finishing touches to be completed before the two-building complex was fully operational.

That work was completed by the end of February and the new hospital has been serving the people of Pukapuka ever since.

Originally constructed some 60-odd years ago from limestone and concrete, the old hospital formerly consisted of 14 rooms and offices spread over two buildings.

Accordingly, Pukapuka Hospital now boasts a new maternity ward and delivery room, new men’s and women’s wards, a new kitchen, and a dental clinic. Bathroom and shower areas have also been upgraded, the waiting area has been extended, and a 50,000-litre underground concrete water tank has been installed.

Estimated total costs for the project were $1 million, covering labour and materials, including vinyl flooring which was imported from England after the New Zealand suppliers were affected by the Covid-19 pandemic.

Te Marae Ora have sourced new beds and other equipment for the hospital, while the Prime Minister also raised support from the government of Japan to help furnish the new building.

The concept for the new Pukapuka Hospital was first developed in 2015, with project implementation commencing in 2019.

Challenges arose in 2020 due to the effects of the Covid-19 pandemic on shipping and the availability of materials, which also coincided with a run on building supplies in Rarotonga as the construction industry there ramped up business during this period. This in turn affected the project schedule, resulting in a nine-month construction period.

With construction now complete and the hospital fully up and running these past few months, Cook Islands Investment Corporation would like to acknowledge the many different individuals, groups and organisations involved in bringing this important project to fruition.

Firstly, the people of Pukapuka and Nassau for their contributions during the consultation phase on project scope and design, including the dozen locals who later provided labour services. Pukapuka-Nassau MP Tingika Elikana should also be recognised as a driving force in prioritising the hospital rebuild for the people and communities of his constituency.

“Thanks, are also due to Te Aronga Mana o Pukapuka – Papa Ariki and the Tawa leaders and council members – as well as island government officials Mayor Levi Walewaoa and Executive Officer Pio Ravarua, along with their administration staff and support networks.”

Others involved in the Pukapuka Hospital upgrade include contractors Romani Katoa and Teariki Pirangi, consultants Des Eggelton and Tani Mussel, and four CIIC staff of Pukapukan heritage who returned home for the nine-month construction period.