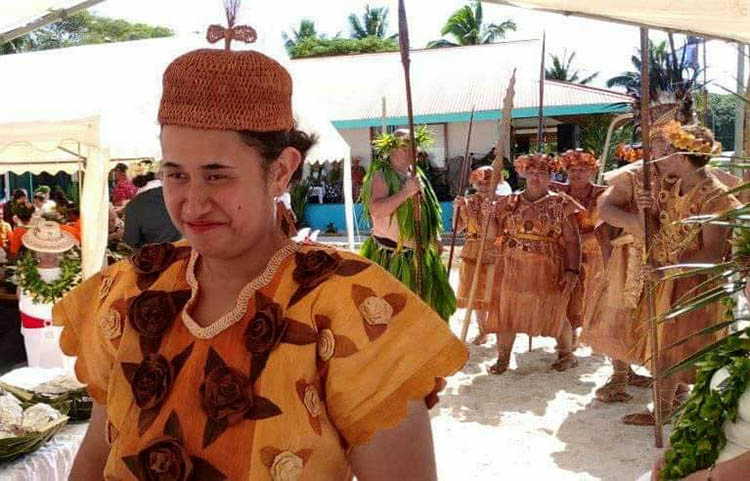 Hundreds gathered on the island of Atiu on Friday, to witness the akamarokura'anga (investiture) of 25-year-old Tupuna Moeroa Ngamaru as Ngamaru Tupuna Ariki, in the second ceremony for the same title. By Melina Etches.

The newly-invested Ngamaru Tupuna Ariki said she was excited and relieved to see the island come together for her investiture yesterday.

She was appreciative of all the support, preparations, ata manga (food gifts) and hard work from the people of Atiu.

The Ngamaru Ariki investiture was marred with controversy after a family member held a separate ceremony to claim the title.

Ngamaru Tupuna Ariki said she paid a visit to her uncle – her father’s brother Ngamaru Tereaa Ariki (Papa Katu Tereaa Okirua) – who was invested with the same title last month, on a personal level.

“I went to visit him on Thursday as he is my uncle, and it went well,” she told Cook Islands News.

But he said despite the objectors, the proceedings continued according to plan.

The police were at hand to ensure there were no physical interactions, Framhein added.

The day’s event started in the morning at Te Arii O Te Rangi, then to a church service where Ngamaru Tupuna Ariki was anointed by the president of the Cook Islands Christian Church (CICC) Tuaine Ngametua. At the Te Au Tapu marae at Te Arii O Te Rangi for the investiture, the pa’u (drum) was pounded by Paavo Mustonen, the pu (conch shell) was blown by Carl Glassie and the karakia (traditional chant) was performed by Casper Mateariki.

Five umu’s had been fired up on Thursday night to cook the astonishing amount of food that was received for the feast – 200 pigs, 400 cartons of chicken leg quarters, 100 cartons of whole chicken, and over 200 sacks of Atiu taro, and many hands were involved in grating about 1500 coconuts.