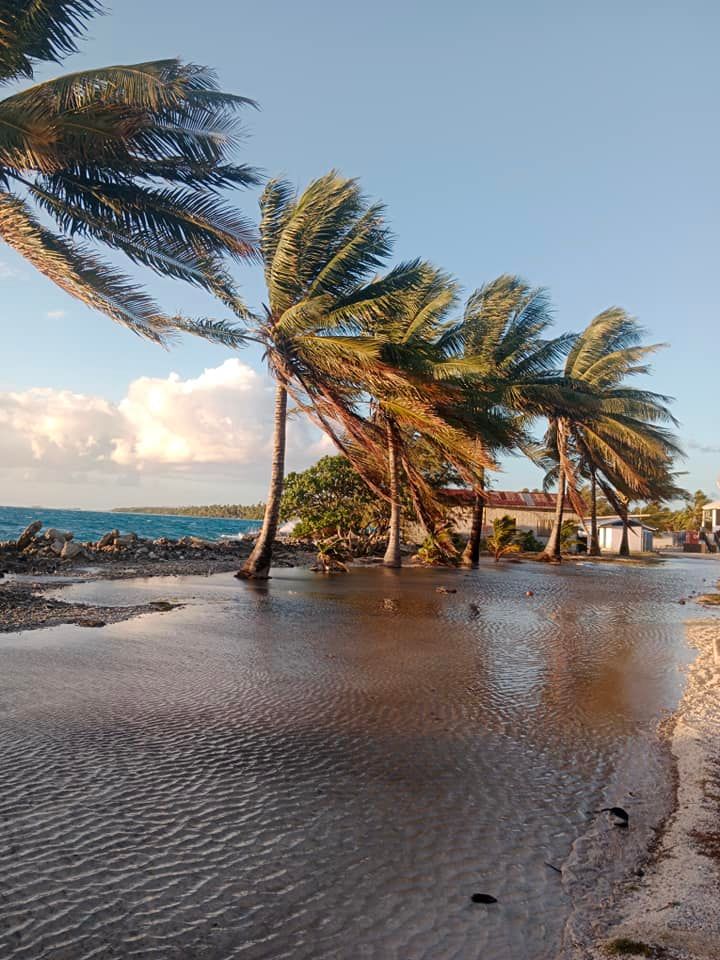 Mama Jemima Tekena of Penrhyn is well and safe having already moved to another home to the middle of the island the night before exceptionally high king tides washed through, damaging her home.

Tekena’s home is situated at the wharf where she has lived since the mid-1990s.

Penrhyn is the largest and the northern most island in the Cook Islands group comprising of two settlements – Omoka and Tetautua which lie at opposite ends of the lagoon.

The island’s executive officer Puna Vano said “to be on the safe side from the Tai Akaki (king tide) we relocated her the night before and disconnected the electricity”.

“No one has been hurt, and we are all safe here,” he said.

On Wednesday, Vano and CCL (Civil Contractors Ltd) workers visited Tetautua to dismantle the “boxing” from the water tank.

“We noticed the Tai Akaki then,” said Vano.

Leaving Tetautua at around 6.30pm via the island barge, the group returned to Omoka where Vano “noticed the sea level was very high, about 100 centimetre more it would have reached the top of the wharf”.

Anticipating higher than usual king tides, the Island Government workers moved fishing boats further in towards the island to be better prepared. They stayed at the harbour until 11pm “just to keep an eye on things”.

The king tide came through yesterday morning flowing under Omoka School and into the middle of the playground, and reaching the roads in some areas.

Omoka School principal Apii Napa said a warning was sent out on Wednesday night “so we had started our preparation and precautionary procedures then”.

“People like us living on the coastal areas made sure our homes were as safe as possible.

“Today (Thursday) we were fortunate that we were able to see the peak of the king tides occurring rather than if it had happened at night,” said Napa.

School was dismissed at morning break (10.25am) when the sea started to come into the school grounds.

“We are taking precautions, we’re safe and just waiting it out,” said Napa.

According to the wisdom of the elderly on Penrhyn, the last time the island experienced such high tides was in 2015.

The atoll island of Manihiki also experienced unusually high king tides flowing through houses on the coast reaching up to and over roads.

Manihiki resident JeanMarie Williams said it has been many years since a “Mata Tonga” (king tide) like this had occurred on the island.

The last week of June and the first two weeks of July is Mata Tonga season, explains Williams. “It’s normal to have the south wind high seas at this time of the year but compared to others this one is really bad. So every year we hope Mata Tonga will be kind, we are all safe here.”