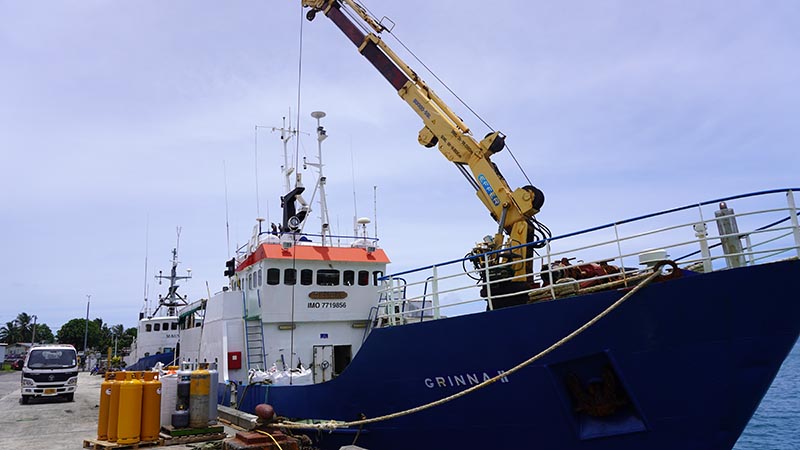 Taio Shipping Managing Director Tapi Taio says he has two vessels in their fleet that can handle 200 tonnes each, the Lady Moana and Grinna. Both are well-suited for shipping to the outer islands. (PHOTO: EMMANUEL SAMOGLOU) 20112008

As shipping delays stall a controversial construction project in the outer island of Penrhyn, one local shipping firm is questioning why his company wasn’t approached for their services. Emmanuel Samoglou reports.

The construction of two cyclone shelters on the island of Penrhyn is not expected to begin until next year, with the project’s contractor citing the global Covid-19 pandemic as the reason.

Earlier this year, local company Civil Contractors Limited was awarded a $5.3 million contract to construct two multi-story masonry cyclone centres in the villages of Omoka and Te Tautua on the northern group island.

Even before construction has begun, the project has been embroiled in controversy with the political Opposition and members of the public calling for an investigation by the Cook Islands Audit Office and the Public Expenditure Review Committee (PERC).

The holdup has been attributed specifically to the delayed delivery of a barge from Australia, which the contractor has procured to assist with the delivery of equipment and supplies to Penrhyn.

However, some have questioned why the company went ahead with the purchase of a barge from an overseas company, when one prominent local shipping company says it’s capable of taking on the job, but was never approached for its services.

As for Civil Contractors Limited – a relative newcomer to the local construction sector which is believed to have been formed in July 2019 – it says the barge is expected to arrive “… within the next fortnight”.

“CCL tendered for the Penrhyn Island Cyclone Shelter project well before COVID19 was an event, and as has occurred globally, the pandemic has affected the efforts of our logistical supplier in securing and delivering the barge in the time that was expected,” reads a company statement sent to Cook Islands News.

“CCL’s successful tender bid provided for adequate logistics that could deliver heavy plant, equipment and materials safely to shore and within a budget, to the two islands in Penrhyn.”

According to the statement, Civil Contractors director and project manager Mark Ford is expected to travel to Penrhyn “in the next few weeks, and to finally get this project underway”.

Charlie-Puna said material has already been procured by the company and is in Rarotonga awaiting for transport. “Between the time the barge arrives to mid-January there will be several trips by barge to mobilise equipment, machinery, personnel, building material,” she said.

“ … there is no ship or barge big enough to mobilise this project,” she added.

But Tapi Taio, managing director of Rarotonga-based Taio Shipping, said his company is well-suited to participate in such a project, yet were never approached by CCL.

“They are new, we’ve never seen them here,” Taio said.

He said one of the unsuccessful tenderers for the Penrhyn project with prior construction experience in the outer islands approached Taio Shipping to act as a subcontractor, requesting to quote for shipping 1000 tonnes of material and equipment. Ultimately that company lost out to Civil Contractors.

Taio Shipping has two vessels in their fleet that can handle 200 tonnes each, the Lady Moana and Grinna, he said. He said he could transport 1000 tonnes in a month, based on a return trip to Penrhyn taking seven days.

Taio said the company previously assisted with the transportation of materials and equipment for the construction of a cyclone shelter in Pukapuka.

Last month, Ford told this newspaper that Civil Contractors has received advance payment as per their contract with Infrastructure Cook Islands to start the project, however it is not known how much the company has been paid thus far.

Infrastructure’s Charlie-Puna did not answer questions regarding how much public money from the $5.3 million contract has been forwarded to the company to-date.

In her call demanding for an investigation last month, Opposition leader Tina Browne questioned “… whether very significant payments have already been made to the contractor before the commencement of any work on the Penrhyn buildings.”

One source close to the matter said project talks were recently held with officials from the Ministry of Finance and Economic Management. During those talks, it is alleged one ministry official said the government was considering assisting with CCL’s costs to deliver the barge to Rarotonga.

As for Taio, he said he had no issue being left out of the project and watching Civil Contractors sort out its shipping needs independently.

“I’m happy if the money is coming from their pocket,” he said.