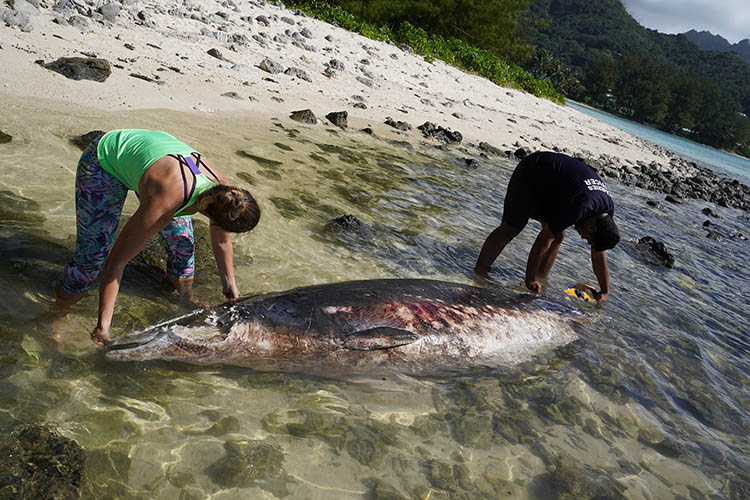 The beached beaked whale that was found washed up on Muri Beach on Wednesday. MMR/21071650

The carcass of a dead beaked whale was found on Muri Beach last week, and researchers say it most likely died from natural causes. Alana Musselle reports.

The dead whale was found washed up in the intertidal area of the seaweed aspect of motu Koromiri. After the sighting, the Ministry of Marine Resources (MMR) was informed and staff went to the site to investigate, along with shark researcher Jess Cramp to gather measurements and other biological information.

They identified the whale as a sub-adult beaked whale, but due to deterioration and missing portions of its body, this was not able to be fully confirmed. The whale had numerous shark bites on its body which likely occurred post-mortem.

Ministry of Marine Resources’ scientist Kirby Morejohn said the whale most likely died while at sea, and washed up into the lagoon after it had been nibbled on by sharks.

Morejohn shared how some biologists and scientists think that the use of man-made sonar from ships and submarines may interfere with a whale’s brain waves causing the whale to lose its sense of direction, resulting in it beaching itself.

There is also the factor of polluted oceans due to human activity which can cause whales and other sea animals to become sick or poisoned from daily waste that has been poured into the ocean as well as harmful chemicals.

However, Morejohn shared that due to the remoteness of the Cook Islands and the lack of heavy human activity, most whale beachings that occur have happened due to natural causes where the whale simply died and drifted into the lagoon.

“It occurs, but it occurs infrequently.”

He shared an example of one of the most recent whale beachings in Manuae where some of the team at MMR visited earlier this month.

A beached humpback whale which they had already seen on a separate trip in March was still decomposing in the area. “Even on uninhabited islands with very low impact from humans, whales still wash up,” he said.

Beaked whales are periodically observed in Cook Islands’ waters and have been stranded on local beaches in the past.

One of the country’s local species, the Cuvier’s beaked whale, is the deepest diving mammal. They can reach depths up to 3 kilometres and hold their breath for nearly four hours.

To put these numbers into perspective, the humpback whale depth record is 616 metres and they can hold their breath up to an hour.

Because beaked whales spend such little time on the surface, they’re difficult for biologists to study and therefore one of the ocean’s more mysterious citizens of the deep.

After being examined and investigated by the team at MMR, the whale was left to take its natural decomposing process without any tampering from humans.