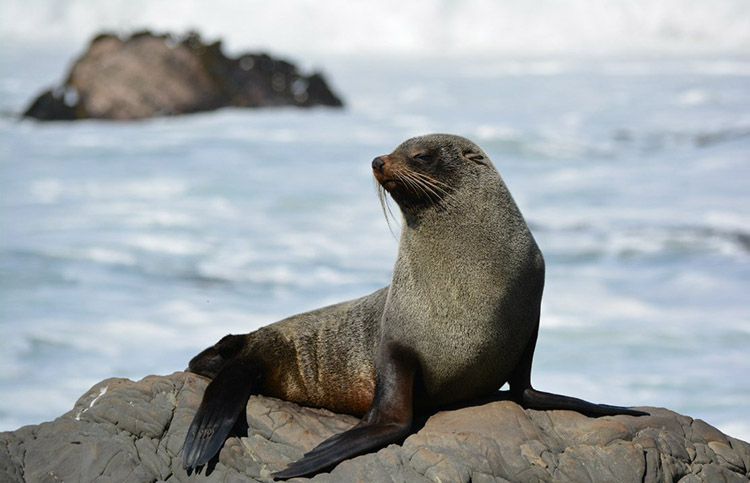 Young kekeno/New Zealand fur seals, as pictured here, might look cute, but they can move quickly and inflict a nasty bite. (PHOTO: Department of Conservation) 21072018.

Since the travel bubble opened with New Zealand, a young Kekeno/New Zealand fur seal has also decided to pop in for a bit of a holiday to Rarotonga this week - travelling over 3000 kilometres from its home.

The Ministry of Marine Resources (MMR) Secretary Pamela Maru confirmed that a yearling seal (weaned but under 2 years old – or thereabouts) had visited our shores.

If the seal is sighted, members of the public are advised not to approach the seal. “We are encouraging people to stay away from them (at least 20m), and not to feed them,” said Maru.

Seals do visit periodically, they usually stay for a couple days to rest, before heading off again, she said.

According to Cook Islands Biodiversity database ,the New Zealand fur seal is one of seven species found in the Southern Hemisphere.

Several seals have been found in the Cook Islands, the first was recorded at Mangaia by English missionary William Wyatt Gill in the 1880s.

In the Cook Islands Review of July 1956, J. Allan Berry wrote that on June 28 that year, a leopard seal chased two Arorangi fishermen onto the reef where it was eventually speared.

After an examination of its hide and the teeth, the Resident Commissioner G. Nevill had no doubt it was a leopard seal.

A second leopard seal was reported to be seen by fishermen outside the reef at Ngatangiia on April 16, 1960.

Seals are a protected species – but the news came too late for one that was reportedly killed in Mangaia in 1990.

In July 2013 a young fur seal was discovered at Rarotonga and a few years later in July 2016, another fur seal was sighted at Blackrock.

Seals are best left alone, and if you do spot it along the coast, do not approach it; the seal is likely to react defensively and try to attack.