Thursday 20 May 2021 | Written by Alana Musselle | Published in Local, National 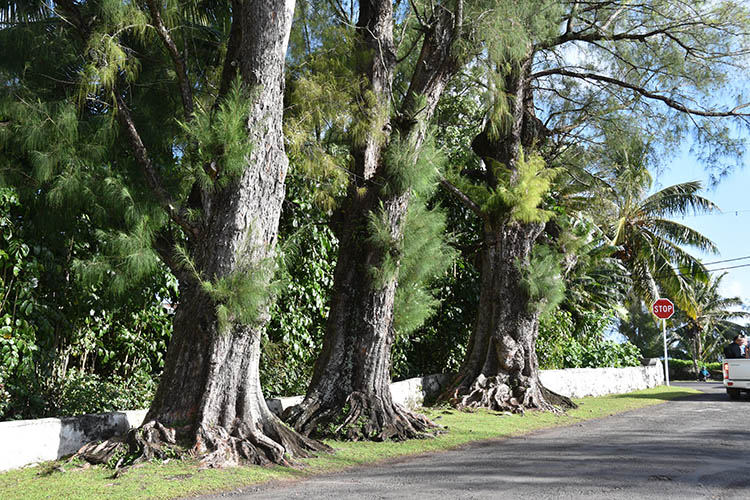 Three of the ironwood trees that are earmarked for removal. - 21051907

The removal of ancient trees from an Avarua church ground was halted yesterday after the church agreed to meet with those opposed to the work.

The Cook Islands Christian Church (CICC) wants to remove the toa trees (ironwood) whose roots it says are interfering with a coral boundary wall, as well as graves in the Avarua church grounds. It says the giant trees are becoming a hazard.

Yesterday the church asked T&M Heather to examine the trees and begin the work of removing them.

The land, donated to the church by the Makea Nui family, is divided by a small wall which separates the church property from the adjacent Makea Nui land.

Attempts to begin any tree cutting yesterday were interrupted by two landowners from the Makea Nui line who showed up to defend the ancient trees, hoping to at least come to a compromise.

Noeline Browne, who is opposed to their removal, acknowledged that the land now belongs to the church, but said these trees "are a part of the church and the island’s history and it is morally wrong to remove them".

“There are always other ways around problems that do not result in complete destruction. Yes, this is their property, but they cannot go around deciding to destroy trees that were put there by our ancestors,” she said.

Browne said there were similar instances in the past on this particular section of land where ancient historical monuments such as grave headstones had been “carelessly and thoughtlessly removed with no consideration for the history, but of only the ‘need for maintenance’ at the current time".

Her sister, Diane Browne Holford, responding to the church’s concern of the trees interfering with the wall between the two properties, said she "could fix that wall in five minutes. Those trees will never be able to be replaced".

Some members of the church’s congregation did not appreciate the input from the landowners, with one woman saying that "they have no right to have any say in this matter”.

Another opposed to the tree removal is Tim Buchanan, who is also a descendent of the Makea Nui family line.

“Our concern started when we heard that the church wanted to completely destroy these trees. Trimming is fine, destroying is not,” Buchanan said.

“These trees have been planted since the birth of the church, and they have bore witness to the growth of the church and our modern nation. So it is irresponsible of the leadership of the CICC church to then want to destroy them. They need preserving, not destruction.”

Other concerned members of the public have commented on the increasing number of ancient trees being removed on the island of Rarotonga.

“Over this past year, for some reason, people have been busily ‘cleaning up’ this island by destroying the beautiful trees grown with God’s power, these living things, some of which took centuries to grow – were cut down in just a few minutes. It’s got to be a sin,” a concerned member of the public wrote in a letter to Cook Islands News.

“These are the same toa trees recognised by famed late botanist Arthur Whistler of Hawaii as the most magnificent in the Pacific. Cutting the trees down isn’t going to make the road any wider. Come on Avarua CICC congregation!  Let them be,” they wrote in distress.

It's understood the church and those opposed to the tree removal will meet to discuss the concerns of both parties in an attempt to seek a resolution to the issue.

Efforts to get an official statement from the Church on the matter proved futile.