One step at a time, PM says as Cooks-NZ bubble opens

Tuesday 18 May 2021 | Written by Emmanuel Samoglou | Published in Local, National 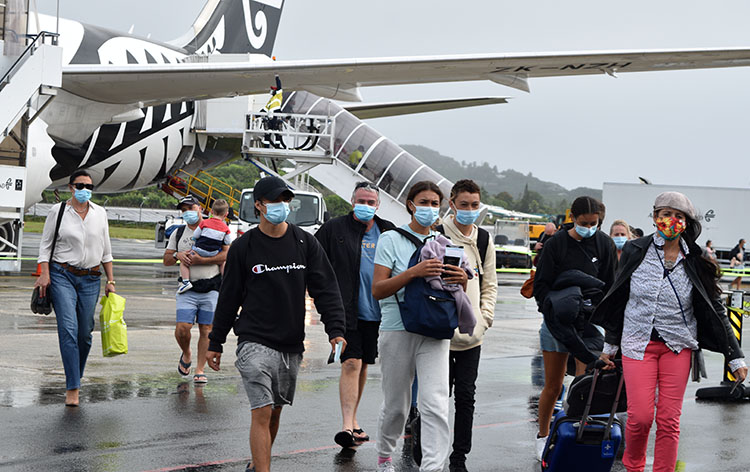 The first tourists arriving under the Cooks-New Zealand travel bubble. 21051719

Prime Minister Mark Brown was at Rarotonga International Airport to welcome the first group of Kiwi visitors on Monday, just as he was preparing to depart the country for New Zealand on a personal trip.

“Every journey begins with one step, and they’re many steps to come,” said the PM, addressing dignitaries and the media.

“… with our borders reopening and the process of vaccinating our people against Covid-19 beginning, we look to the future.”

Rarotonga’s airport – long dormant apart from a trimmed schedule of domestic travel – was once again a flurry of activity as the country welcomed the first group of arrivals under the travel bubble which came into effect yesterday.

Brown told CI News the decision to open the border to tourists was largely welcomed by the community, despite some concerns in the Pa Enua.

“There was some apprehension in the outer islands,” he said.

“But I think a lot of the work that we have done in assuring people and health preparedness that we’ve put in place has provided people with a lot of assurance.” “There was a case in Aitutaki where there were still concerns about tourists coming in before everyone was vaccinated. Our team was able to talk to the community there and allay those fears. We’re back on track and can stick with the plan we’ve got,” the Prime Minister said.

During a press conference, Brown said Australia would likely be the next country the Cook Islands will establish a quarantine-free travel arrangement with.

He said detailed discussions with Australia’s government have yet to begun, but said the quarantine-free travel arrangement with New Zealand contained a “docking arrangement” that would provide for Australians to visit the Cook Islands should an arrangement be put in place.

“We will see how this one tracks first,” he said.

“But definitely, if things are tracking well, then there is no reason to consider extending the bubble to consider Australia.