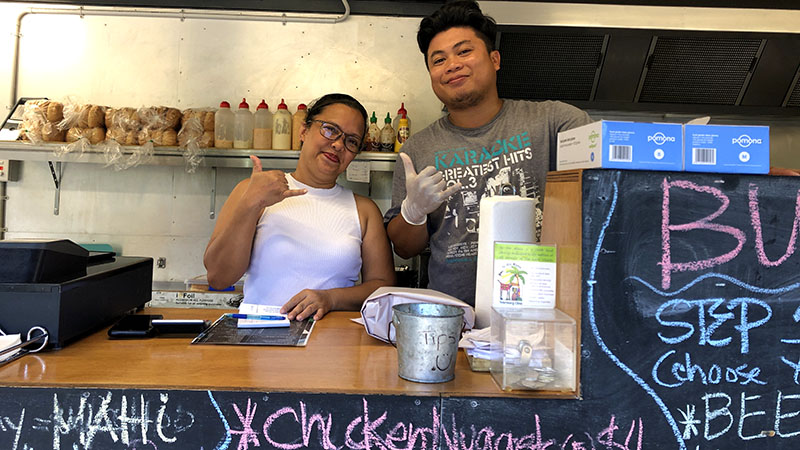 The mayonnaise shortage in Rarotonga hasn’t created any issues for Vibe Fish Van. Their chef says everything is made from scratch. 20111225

A month-long critical shortage of mayonnaise is set to end this weekend with an expected shipment of the popular condiment.

The nation’s most popular brand, Best Foods mayonnaise, has been a hot commodity since a human error resulted in a shipment failing to arrive by boat last month, according to one company that imports the product to the country.

Ange Napa, supervisor at The Energy Centre in Avarua, which retails in petrol and food products, said: “Our container would have been here three weeks ago, but it got left in Samoa.”

“The captain was in a rush and he didn’t put the container on the boat.”

In addition to The Energy Centre, it is believed Best Foods is imported by only a handful of retailers in the country, including Cook Islands Trading Corporation.

Napa said the shortage is expected to be relieved this coming weekend with the arrival of cargo ship Liloa II, which recently set sail from Apia, Samoa.

“The boat should be in by Saturday, and hopefully they’ll have it out by Monday.”

Local retailers and residents have struggled with low supplies.

Palace Takeaways in Avarua has had to remove some items from their menu due to the shortage, and customers hoping to order one of the outlet’s “wet” burgers have been forced to choose an alternative.

Yesterday afternoon, front house staff at Sea Salt Takeaway in Avarua said they were down to their last quart, or just over a litre. Contingency plans are in the works.

“Maybe we’ll have to ask our customers if they want to try another one of our sauces,” said Yeyua, a staff member at the restaurant which is located adjacent to the port.

Also on edge was Taia Drescher and partner Paul who visited Prime Foods yesterday looking for some “Best Foods”. They were given the bad news at the checkout counter.

Drescher said she tries to ship a couple of cartons to family members on the outer island of Palmerston as often as possible. She said they enjoy mayonnaise with fish, corned beef, and coconut crab.

“It’s very serious, my parents will cry if there’s none,” she said with a laugh.

But an eatery that has managed to avoid hardship caused by the shortage is Vibe Fish Van in Panama.

Chef Roro Fuentes said they make their lemon and garlic aioli, as well as tartar sauce, in-house. “Everything is made from scratch,” he said. “We’re not affected that much; everything is moving on the menu.”