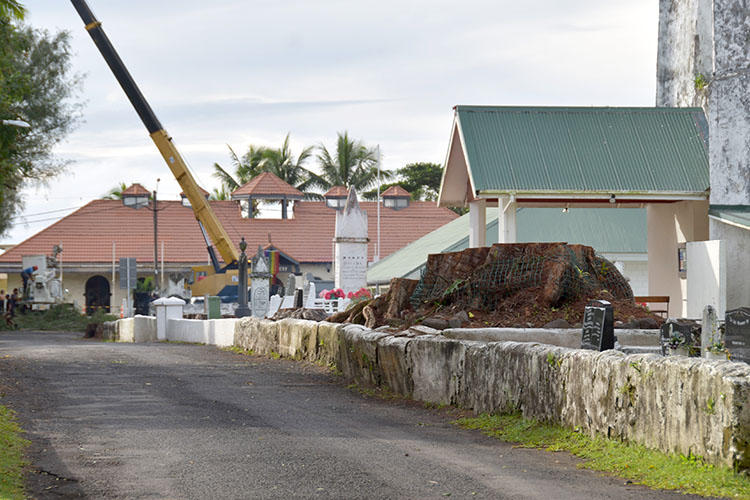 One of the ironwood (toa) tree stumps outside the CICC church, where at least five trees used to stand. 21060923

Landowners say they have been betrayed after more old-growth Toa trees were removed yesterday at Avarua CICC Church, despite earlier protests and negotiations.

Workers have now cut down nine ironwood (toa) trees at Sinai Hall and the Cook Islands Christian Church (CICC) in Avarua, contradicting an earlier agreement with landowners and members of the public.

After protests halted the removal of the ancient trees from the church grounds last month, stakeholders reached an agreement that six trees would be cut down and five would be preserved for the sake of history.

Yesterday, crews worked with chainsaws throughout the day to remove the trees, which once framed the historical CICC church.

Most of the trees have now been removed, with the exception of a few that still stand near the main road at the entrance to the Sinai Hall driveway.

The church’s reasoning for removing the trees was explained by Tangata Vainerere last month, who was acting as a mediator between the CICC church and the traditional landowners.

He said the trees needed to be removed in preparation for a ‘beautification program’, which was said to commence in two years.

The church remained silent on Wednesday, refusing to comment on the matter.

Noelene Browne, a descendent of the Makea Nui line and one of the traditional landowners, had fought and protested for the preservation of the trees during the past month.

Browne and her sister showed up to the site in protest last month upon hearing about the church’s plans for the trees, and had been following the matter since.

At the time, Browne said she was at least somewhat content with the compromise that was able to be reached when the church told her it would remove six trees and preserve five.

Browne said she was in the Land Court on Wednesday when the trees were cut down “so she was unable to do anything to prevent anything”.

“I am speechless,” she said. “They have broken their promise.”

“Once again the CICC hierarchy has failed to protect their own history,’’ he said.

The beautification project had been planned by the church to celebrate the 200 years of Christianity arriving in Rarotonga. The church had previously stated that some of the trees were standing in the way of the project’s success.

Attempts to begin any tree cutting last month were interrupted by two landowners from the Makea Nui line who showed up to defend the ancient trees.

The land was donated to the church by the Makea Nui family.