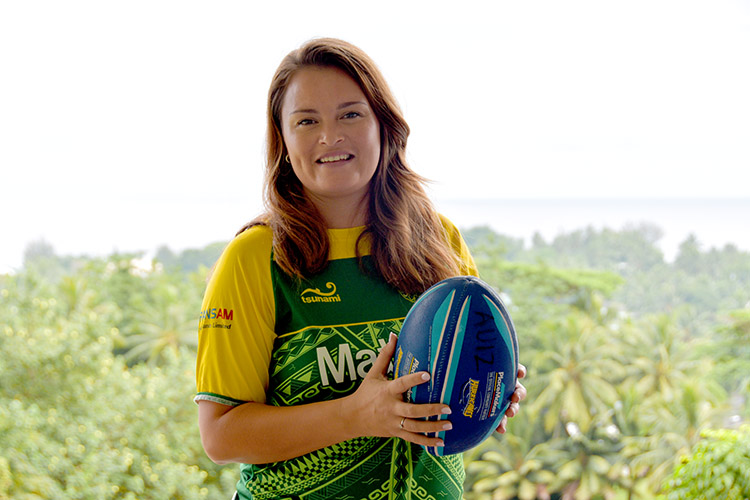 Ashleigh Wihongi-Willis is looking to steer Cook Islands rugby towards a healthy future. 21060905

New Cook Islands Rugby Union president Ashleigh Wihongi-Willis is embarking on a bold path to level the playing field for men and women in the sport.

Ashleigh Wihongi-Willis took the reins at the union’s annual general meeting on Monday.

She credited former CIRU executive member Lara Sadaraka with “forging the way for females in rugby”.

“Unfortunately there needs to be more time put into women’s rugby, it’s unfortunate because essentially we have a good pool of local and international talent.

“We need to give them the career pathways to succeed.”

“We are the first rugby union in the Pacific to have two females on the board,” Wihongi-Willis said. “At the end of the day it comes down to funding and I think that is where my strength lies.

“We have already secured some funding to go towards our under 18 women’s sevens development pathway program and we will be looking to secure more funding in the coming year so we can equal out the opportunities to males and females.”

The role is voluntary, she said.

Wihongi-Willis said she has a big vision for Cook Islands rugby.

“The most important thing we need to do is put a working committee together to revise our new constitution, it has to be revised to make it relevant and actionable to the situations we as the Cook Islands uniquely face in rugby.

“The biggest part of the uniqueness which can be navigated as a strength is our depopulation.

“We have to utilize Cook Islanders both here and abroad in order to strengthen our base.”

That task would come with challenges, Wihongi-Willis said.

“There are a lot of logistical issues when putting international teams together,” she said. “For me the vision would be that we strengthen and grow participation at club level, it’s our job to facilitate that growth at club level.

“Essentially, if we don’t strengthen grassroots rugby we have no union.

“We are a lower-tier country in terms of rugby, we have to navigate the logistics of being organised and prepared; we have to be ready and competitive at short notice.”

The longer term vision was to develop the infrastructure to retain Cook Islanders.

“We can develop infrastructure so that Cook Islanders will no longer have to leave our shores in order to develop in rugby,” she said.

“We would bring Cook Islanders back home by building an academy by which we can strengthen and develop rugby, as well as our population issue.”

That included developing career pathways in rugby for youth “both male and female”, she said.

“We are looking to develop a database to keep track of players here and overseas.”

Wihongi-Willis, also vice president of the Arorangi Rugby Club, said she had undertaken online training with the support of World Rugby funding and CIRU executive members in preparation for the role.

“I have been working closely with CIRU rugby development manager Ben Koteka for the past two years,” she said.

“I have taken over portfolios for junior and women’s development in the past couple of years, I have really enjoyed those opportunities and I look forward to strengthening those pillars.”

Another vision was the development of rugby in the Pa Enua, she said.

“It’s about growth, participation in the sport, and career pathways.

“I want to congratulate our board, especially Tereapii Tumutoa who is our delegate for Aitutaki, and has a vision of development in the Pa Enua.

“I also want to congratulate Rachel Metuangaro, who has done a lot of work in the past two years.”

Wihongi-Willis takes over from Simiona Teiotu, who will hold the role of CIRU vice president.