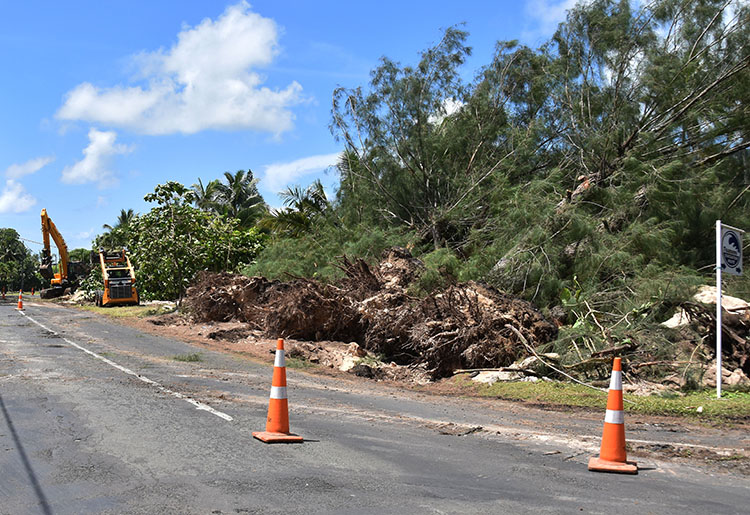 Toa trees that were removed yesterday at a site next to Takitumu Primary School. The removal of the toa trees at the school is expected to start Tuesday. MELINA ETCHES/21011119

Work to remove the toa (ironwood) trees that have graced the road side of Matavera since the early 1960s started yesterday.

Resident Renall Vogel, who has been vocal against the destruction of the toa trees, was devastated to see the trees being cut down.

Vogel was stunned and at a loss for words in the early morning.

He said the advertisement Infrastructure Cook Islands (ICI) placed in Friday’s edition of Cook Islands News advising public of the tree removal was not clear.

“ICI have manipulated the public with their advert that read Main Road Upgrade Takitumu School, there is nothing about the trees, so they are not being transparent,” Vogel said.

“It is a big project and intentionally they are not informing the community properly, if they are not transparent, how do they deal with people?

“This is not what we want from government departments. We don’t want this kind of arrogant leadership, be transparent.”

Still disturbed by the removal of the trees, he hopes that when the Takitumu School trees are removed, the tree timber is given to the school to benefit from its sale.

Vogel’s father Papa William (Ve) Vogel agreed the toa trees that were planted for the school must be given to the school who can use the money from its sale. He said the timber should not be taken out of the village.

Vogel is asking parents to take their children to the school area this morning (Tuesday) and to meet at the utu tree for a photo, “so it can be recorded as part of the special history of Matavera before the trees are taken down”.

Last month, Secretary of Infrastructure Diane Charlie-Puna confirmed the toa trees that are sitting within the road corridor would be removed. Toa trees that were removed yesterday at a site next to Takitumu Primary School. MELINA ETCHES/21011118

The proposal included the widening of the road to the “true boundary of 10 metres legal road corridor”.

People in the community against the removal of the well-known toa trees had wanted other options to be considered in an effort to save them.

However, Charlie-Puna had said the majority understood the importance of the removal of the trees that was explained by Infrastructure representative Sonny Williams.

But some in the community including Vogel, the former chairman of Takitumu School, were disappointed with government’s decision.

Infrastructure’s proposal in December said they would cater to the community’s requests as best as they could without compromising the most paramount factor – safety.

Charlie-Puna earlier said: “Safety is always the main driver of any infrastructure design and consultation with the public will always be the approach we take and not use the Infrastructure Act to push our agendas through to our people.”