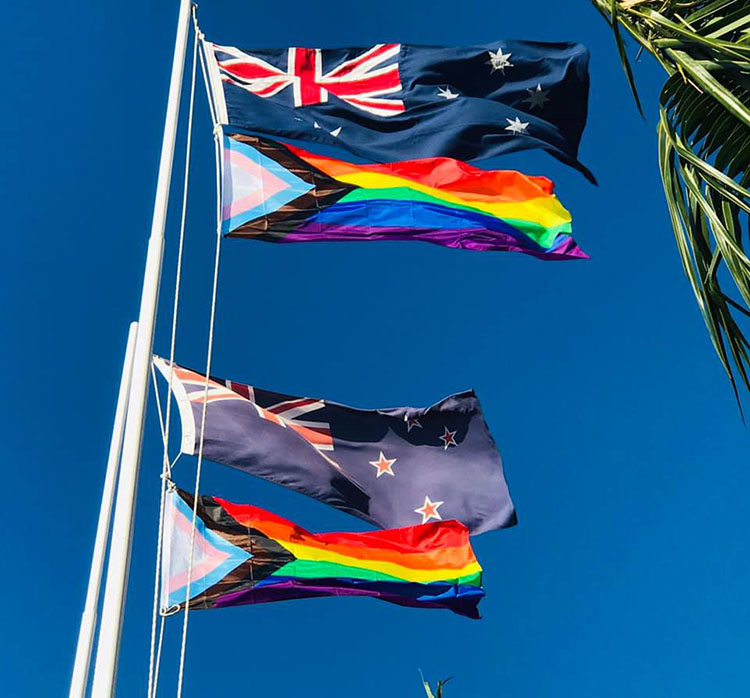 The New Zealand High Commission and the Australian High Commission to the Cook Islands recognised the International Day Against Homophobia, Transphobia and Biphobia by flying the Progress Pride flags on their masts in Rarotonga in May this year. 21051740.

Observers have voiced exasperation over Parliament’s delaying tactics in moving forward with a draft bill that, if passed in its current form, would decriminalise homosexuality in the Cook Islands.

During yesterday’s flash two-hour session of Parliament, MPs granted another extension of six months to a committee tasked with examining the Crimes Bill – a sweeping piece of legislation drafted in 2017.

The bill seeks to replace the existing criminal code and in its current form decriminalises homosexuality in the Cook Islands.

The current law says the offence of “indecent acts” between two males is punishable by up to five years in prison, drawing continued protests from community members who are fighting for equal rights for the LGBTQ+ community.

The current draft of the bill does not include controversial sections in the existing legislation, which labels “indecency between males” as a crime.

Government’s inability to move forward on the matter has drawn the ire of human rights advocates and same-sex groups, as well as community and business leaders.

“I lack of any confidence in the select committee to do the job that they’ve been tasked with,” said Dr Debi Futter-Puati, a vocal supporter of same-sex rights and director of the University of the South Pacific Cook Islands.

“I despair that we’ll ever get MPs to be able to honour the Constitution and treaties and conventions that we have signed on to that relate to the human right of all Cook Islands citizens.”

Karla Eggelton, president of Pride Cook Islands said: “While I am disappointed at yet again another delay, I am hopeful that this extension will give our leaders the opportunity to make the right decision for equal human rights.”

As part of its mandate, the Crimes Bill select committee has been tasked to scrutinise the bill and provide recommendations to Parliament after carrying out public consultations. Committees are composed of Government and Opposition Members of Parliament.

The committee has received a string of extensions from December 2019, September 2020, and again in November last year, when an additional six-month extension was granted after the committee requested time to make changes to the bill after a public consultation process.

Pukapuka MP Tingika Elikana, who chairs the select committee, said further changes need to be made to the bill before a final committee report is tabled with Parliament.

“We are seeking an extension of time before we table our report because Crown law is making some amendments and changes to the bill,” Elikana said.

When asked if this would be the final request for deferral by the committee, he said: “I am hoping so, because the committee has made their decisions, now it’s with Crown Law to redraft the bill.”

An interim report drafted by the committee and submitted to Parliament after the November deferral claimed out of 167 submissions received during the public consultation process, the “majority” wanted the status quo in place, where homosexuality remains a criminal offence.

Unlike other parliamentary committee reports, the report did not include the names of individuals and groups who provided submissions to the Crimes Bill committee.

Parliament was adjourned yesterday afternoon until June 8, when it is expected Government will table the 2021-2022 Appropriation Bill (budget).