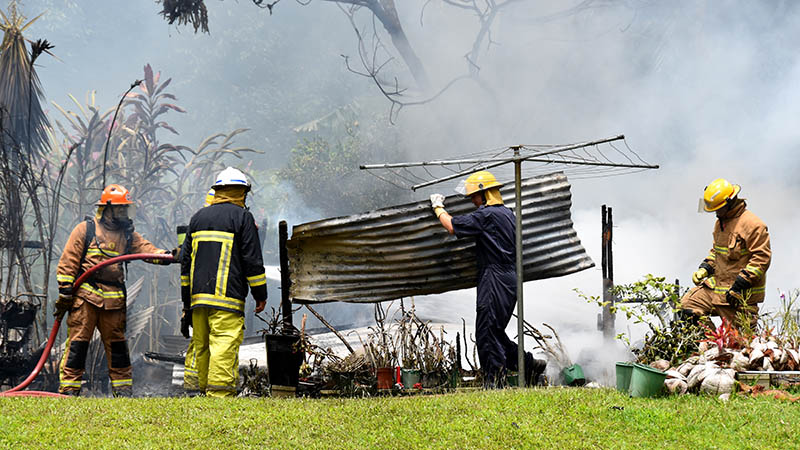 No injuries were reported in a fire that claimed an old studio-type dwelling yesterday morning at Takuvaine valley and a separate blaze in Titikaveka.

Two Teimorimotia fire tankers from the Takitumu station, two pump trucks from Puaikura and a pump truck from Crash Fire attended the scene of the Takuvaine blaze.

It appears the fire may have started from a mosquito coil, said Takitumu fire chief Ali Macquarie.

“Do not place your coils under the bed, put them safely in a place where you can see it, and away from curtains etc,” he said.

The young man who stayed in the hut was unharmed, but sadly lost all his belongings inside and a motor bike that was parked near-by.

His father was called, “but it was too late to do anything, when he arrived”, said a bystander.

The fire was extinguished by quick to respond volunteers who also cleared damaged iron roofing from the burnt site.

The smaller home was attached to the family’s newer, larger building that remained intact.

Macquarie received a phone call regarding the fire from the Airport Authority at 8.51am.

“We managed to round up six volunteers and arrived at the scene eight minutes later.”

Prior to that call, no one from the community had called the Takitumu fire station number to report the fire.

“As soon as there is smoke, call us, don’t assume someone else has already done so.”

Neighbours also assisted with their hoses to try and put out the fire.

The cause of the fire is still under investigation.

Cook Islands News understands the fire was caused by a domestic dispute between a couple and that petrol was involved.

“Stay with your fire, be careful and don’t abandon your fire,” he said.