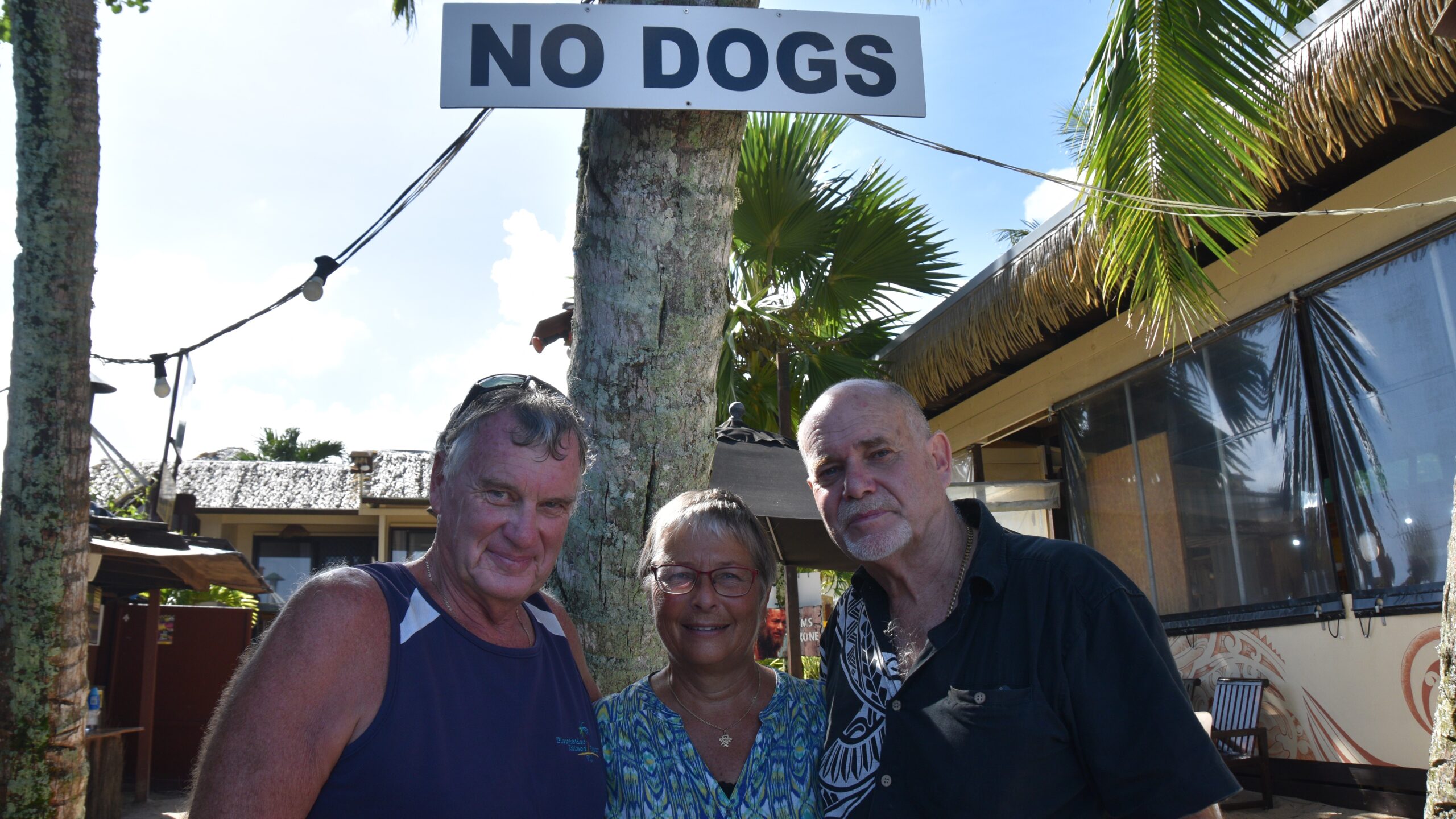 A Kiwi visitor to Rarotonga says it’s only a matter of time before someone is seriously injured or killed following a dog attack which left him bitten, grazed and bruised.

John McConnell is still in shock following the early morning incident on Sunday in which he was surrounded by four dogs and taken to the ground.

It is his first time on Rarotonga in 22 years and he is holidaying here with his wife Penny – the couple are from Waimate, South Canterbury.

McConnell, 65, said he left their accommodation at the Castaway Resort about 6.30am for his usual morning walk.

He was headed southbound on the seaside of Main Rd, several properties along from the resort when he heard barking.

“I looked down the driveway and they were coming towards me, larger sized dogs.

“I didn’t know where I was, they came bowling up, snarling and surrounded me.”

At that stage he was panicking, when he was bitten on the leg.

“I got a fright, they bowled me, I lost my footing.”

McConnell suffered bruising and grazing when he hit the ground.

“I was shaken and in shock, then I managed to get back on my feet, it was lucky they didn’t come back at me.”

McConnell continued on his way before “quietly” returning to the resort.

McConnell said police visited the resort and took a statement from him.

McConnell suggested there needed to be a cull of the dog population on Rarotonga, dogs be registered, and kept within fenced boundaries.

“They have to get tough on it.”

Ash said the roaming dog problem has been ongoing at the resort.

“They have the potential to kill someone, I am worried about kids.

“Our guests cannot walk down the beach without a pack of dogs coming at them.

“Someone will get seriously hurt or killed.”

Earlier this month, police announced they would target stray dogs, raising concerns that too many dogs are not being controlled.

“They’re on the loose and causing concern to motorists, livestock owners, residents and visitors.”

Police said they would be now prioritising efforts toward rounding up the roaming animals, and putting stray dogs down.

On Monday police spokesman Trevor Pitt said the owner of the dogs involved in the Sunday incident was informed on Sunday the dogs would be put down.

“I’ve not caught up with the dog ranger unit yet to see what’s happened.”

Pitt said he will likely be releasing more information about the campaign targeting stray dogs next week.

Roaming dogs on Rarotonga have presented numerous problems for authorities over the years.

An ambitious plan was launched in March 2021 when the Dog Registration and Animal Control Committee was established.

The committee includes members of the police, agriculture, tourism, SPCA, and Te Are Manu Vet Clinic.

Tourism Minister Patrick Arioka, who is at the helm of the move to get the problem under control, told Cook Islands News on Monday there had been delays in recent weeks as some committee members had been affected by Covid-19.

He concurred there was still a problem with roaming dogs and said police were making progress in tackling the issue.

“We want to minimise the problem.”