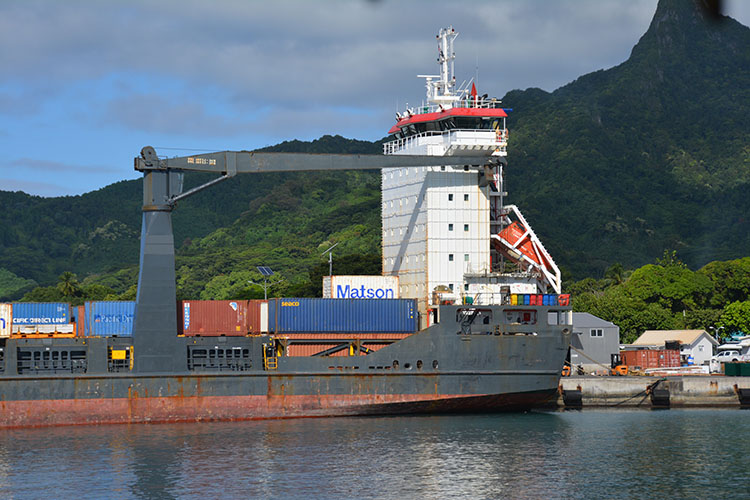 Eggs return to Rarotonga’s store shelves today after a week of low stock.

On Monday afternoon all items, including eggs, were unloaded at Avatiu harbour from the vessel Olomana, voyage 129. The ship arrived on Friday but couldn’t enter port until Saturday morning due to unfavourable weather.

Baby Pancakes owner Viani Tixier couldn’t open her pancake hut at the Punanga Nui Market on Saturday because of the shortage.

“We went to literally every store,” said Tixier. She said every store had the same response, “no eggs”.

Tixier said she put the call out for eggs on Facebook and some people suggested changing to an eggless pancake recipe. Tixier said that wasn’t going to happen as “the eggs are the secret”.

She thinks the demand for eggs is extra high with lots of people on high-fat diets like Keto and people selling home baking.

Some eggs have been available throughout the shortage, supplied by local egg producer Scotts Farm in Muri.

But farm owner John Scott said his egg supply was nowhere near enough to keep up with the island’s demand.

Scott said he’s producing a fifth of what he is capable of.

In a letter to the editor published in the Cook Islands News on Saturday, Scott said the farm has the “capability of producing, in one day, as many eggs as importers sell in a week” but because consumers are choosing imported eggs, it was not economically viable to supply more.

Wigmore’s Superstore at Titikaveka is one of the stores that Scotts Farm provides eggs to.

Some eggs were available at the store on Sunday but none were yesterday. A Wigmore’s worker said egg shortages “always happen”.

The worker said the store’s shortage was from customers being unable to find eggs in other stores.

Wigmore’s stocks will be replenished for tomorrow from Scott's Farm, and Prime Foods will have eggs available from the weekend’s ship.