ANZAC focus on the sacrifices of women 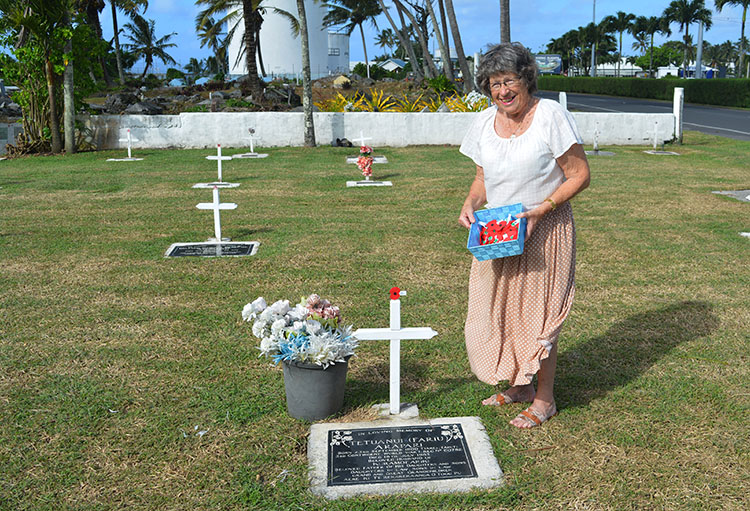 RSA Secretary, Gail Eraio, replaces poppies on the crosses of the graves of Cook Islands soldiers. 21042138

The ANZAC Day Dawn Service this Sunday will have a special focus on women’s sacrifices.

Returned Services Association (RSA) treasurer and Vietnam veteran, Denis Dwane, said the Dawn Service’s overall focus will still be on the traditional ANZAC memories, but women’s sacrifices will have a special mention.

“Women contribute during any war, probably just as much as men,” said Dwane, “they struggle just as much.”

He said these days women take a greater role in the front end of warfare and peacekeeping.

Dwane makes mention to medic Lance Corporal Jacinda Baker who was a New Zealand soldier in Afghanistan who saved many lives in the battle of Battle of Baghak. The battle took place in August 2012 and two New Zealanders and four Afghans died in the battle.

Barker survived the battle but two weeks later she was killed in a roadside bomb, alongside two other New Zealanders.

“Women aren’t put down the back end of war these days,” said Dwane.

He said women suffered previously during active fighting; the women who stayed suffered as much as the men who were away.

“They’re under as much stress as the men.”

Dwane recalls going to school where three out of 10 children in his class had lost their fathers in the Second World War, a painful ordeal for both wives and children.

He said life for veterans’ partners can be difficult as well, when problems like post-traumatic stress disorder (PTSD) occur.

The Dawn Service will be held at the eastern side of the Ministry of Justice building in Avarua. Members of the general public are requested to be seated by 5.15am.

As part of the proceedings, Tutonga Puapii Picknic Rattle, the former Speaker of Parliament, will be the guest speaker. There will be laying of wreaths, the Last Post, and one minute of silence as part of the service.

In attendance will be the Queen’s Representative, Sir Tom Marsters, the Prime Minister, Mark Brown, and the Leader of the Opposition, Tina Browne.

ANZAC Day is not Mondayised in the Cook Islands: The Public Holidays Act 1999 states that if ANZAC Day falls on a Sunday then it is observed on that day and not the following Monday.

In 2014 New Zealand amended its holidays Act to Mondayise ANZAC Day if it falls during the weekend.