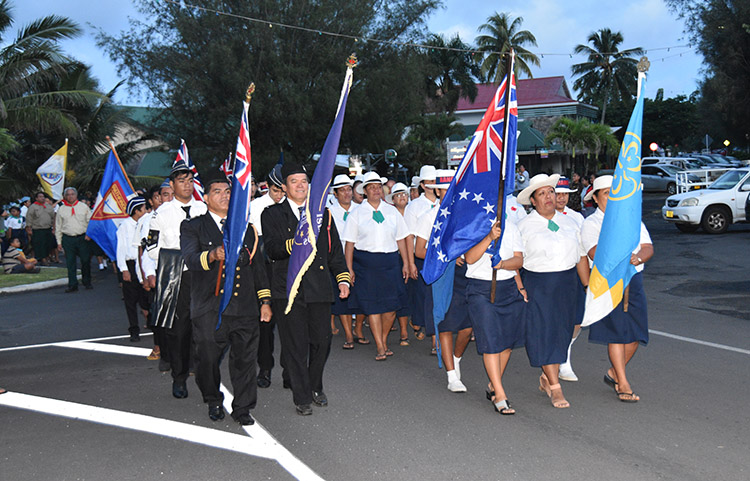 It was a welcome sight for many as the Anzac Dawn Service returned to the Cenotaph in Avarua yesterday, after Covid-19 meeting restrictions put a hold on the remembrance ceremony being held there last year.

There was strong attendance at yesterday’s service, which marked the 106th anniversary of Anzac Day.

Prior to the event, government support organiser Tukaka Ama from the Ministry of Foreign Affairs and Immigration, said he knew the Returned Services Association (RSA) was excited for the return of the event.

The general public was seated before 5.15am, it was followed by the arrival of the Opposition leader Tina Browne, then Prime Minister Mark Brown and finally the Queen’s Representative, Sir Tom Marsters.

In attendance were also the Boys’ Brigade and Girls’ Brigade who played large roles in the ceremony. The Girls’ Brigade shared the poem, “In their land of peace” along with a specific Anzac prayer.

The Boy’s Brigade marching band led the march off and played the last post by the brigade’s bugler.

The general programme started at 6am; the welcome was shortly followed by Bishop Tutai Pere’s message with a focus that, “there is no greater love than to lay down one’s life for one’s friends”.

The former Speaker of Parliament, Tutonga (Niki) Rattle was the guest speaker at the event.

She opened by acknowledging the large turnout of people, making special mention to the young children who got out of bed so early.

This year the RSA is focusing on women’s contribution to the military. In Rattle’s speech, she said, “we salute women in the military in the past and present”.

“The theme acknowledges both international diplomats and domestic service by women both in uniform and out of uniform.”

Lothian said it felt fitting to wear the medals in the Pacific, the place where his grandfather earned them.

After the service, RSA members returned to their venue to acknowledge one of their oldest members, Alexandar Puri.

He served in the New Zealand Army from September 1954 to December 1957 and was awarded a service medal yesterday.

Puri, in his mid-80s, was awarded the medal around 60 years after he served. New Zealand High Commissioner, Tui Dewes, presented Puri with the medal. Alexandar Puri receives a medal for service around 60 years after he served. The medal was presented by the New Zealand High Commissioner, Tui Dewes - 21042510

Prime Minister Mark Brown, in a press statement released after the Dawn Service, said in the Cook Islands almost 500 men volunteered to serve with the New Zealand Expeditionary Force’s Maori Pioneer Battalion during World War I.

“Some of whom made the ultimate sacrifice, losing their lives either on the battlefield or later from war-related illness.

“Recruited to reinforce the Maori Contingents, our young men volunteered en masse at the outbreak of the war.”

Brown said the Cook Islands soldiers in World War I were well-organised, disciplined and widely admired.

He said it is not known the exact figures of how many Cook Islanders lost their lives, but along with Niuean soldiers, it is upwards of 150.

“Despite their war efforts being largely forgotten by New Zealand for many years, and a lack of true death figures as a result of war-related illness, the Rarotongan participation in the war was proof that we as Cook Islanders could forge an independent identity abroad,” PM Brown said.