All packed, ready to return! 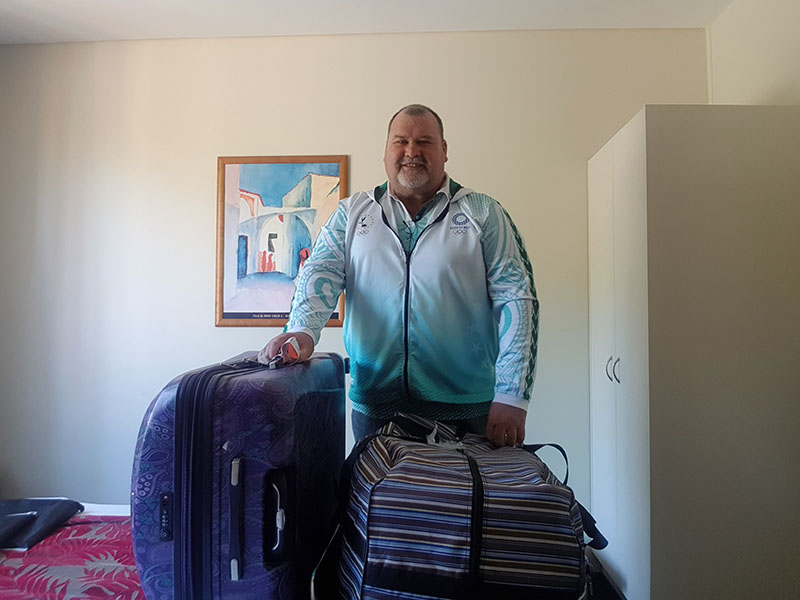 President of the Cook Islands Sports and National Olympic Committee, Hugh Graham left home over 13 weeks ago for the Olympics in July and says it’s a great feeling to be going home - 21101307

Today’s Air New Zealand flight expected to land just after two this afternoon will carry an estimated 232 Cook Islands residents. Included in the group are Olympians, mothers and the Under 13 Cook Islands badminton team.

The cohort will spend two weeks in Managed Isolation and Quarantine (MIQ) at the Edgewater Resort and Spa after they arrive in Rarotonga.

One of the people in the cohort, Simone Fe’ao, said she’s most excited about hugging her kids when she’s out.

“I know many see New Zealand as the land of opportunity and the land of plenty. But there’s something special about our island paradise, the freedoms we have and the simplicity of life that can’t be matched.”

Visiting her unwell mother, Fe’ao arrived in Auckland on the evening lockdown was announced. She said it meant there was no opportunity to do the things she loved about visiting “the big smoke” like going out to dinner, visiting friends and family or shopping.

“I’ll be glad to be able to go grocery shopping without a mask.”

Fe’ao said she was also excited for family dinners, putting her feet in the sand, being able to attend church, Reuben Dearlove’s croissants and a nice meal of rukau taro and rawfish.

She was still busy working while in Auckland and said being away was probably tougher for her husband and children. Fe’ao said she had plans in place to pass the time while in quarantine.

“You can either focus on the limitations in MIQ or find a way to enjoy it and use the time wisely.

“I’ve come up with a bit of a daily routine for myself to make it work because after two weeks I’m sure (my husband) Tony will be handing over the laundry basket and tea towels and I’ll be back on mum duty, like I never left.”

Graham said the reality of going home was a great feeling.

“It will be 13 weeks and three days that we have been away from home since departing back in mid-July for the Tokyo Olympic Games,” he said yesterday.

Graham spent two weeks in MIQ in Christchurch then two months in lockdown in Auckland.

“Some days were good, some days I struggled with being on my own,” he said about his experience in lockdown.

He thanked friends and family who delivered groceries to him over the past two months in Auckland.

“I also want to say a big A1 meitaki to the many community services that provided assistance in many ways for our members of Team Cook Islands and those of us stranded here in New Zealand.

“In terms of spending another 14 days in MIQ, if I can get through 14 days MIQ in Christchurch then eight weeks in lockdown, I can handle it. At least it will be 14 days back home.”

The members of the national under-13 badminton team are also arriving on the flight. Cook Islands Badminton president Thomas Ngauru said the eight players in the team are excited to be returning home.

Ngauru said waiting for the test results was the most stressful part of the process.

Auckland is currently in Covid-19 Alert Level 3, Ngauru said the team enjoyed more freedom since the alert level drop which included getting KFC and McDonalds.

Ngauru thanked the families in New Zealand who hosted the team.

“I understand they’re family but I’m sure it wasn’t what they were expecting, maybe a visit but not a two-month stay,” he said.

A government spokesperson said the MIQ process would be identical to the South Island cohort that arrived last week and left on Tuesday but will last for two weeks instead of five days.

Police spokesman Trevor Pitt said police will be engaged at two locations on the outer rim security of the Edgewater MIQ facility, maintaining order and visibility throughout the 14-day quarantine period.

On Wednesday, assigned police staff were put through the paces by Te Marae Ora, of “donning and doffing” the PPE (personal protective equipment), and the required safety level of handling and managing the gear.

Police have their own staff management processes and will uphold the appropriate security measures, if required at the location, Pitt added.