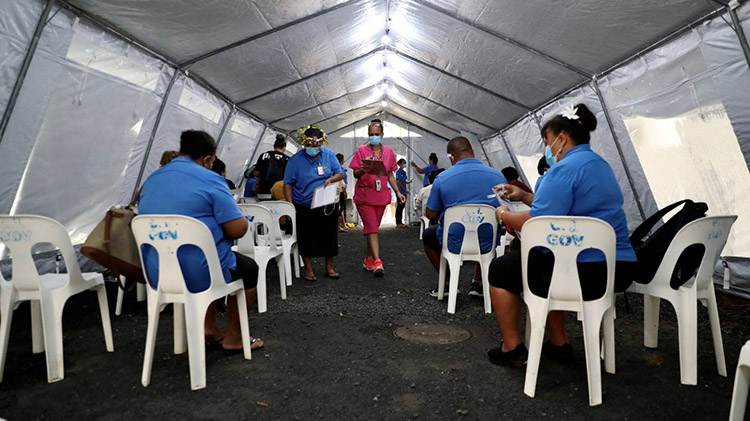 The vaccination clinic at Rarotonga Hospital. 21052427

Te Marea Ora Ministry of Health has asked those waiting for their second Covid-19 vaccination to refer to a schedule on the Ministry’s Facebook page to confirm appointment times.

Yesterday, a TMO spokesperson apologised on behalf of the health ministry after a number of residents were given incorrect dates for their second vaccination appointments.

Spokesperson Jaewynn McKay said, “there was an issue with dates for a few people, for which TMO apologises.”

One affected resident who didn’t want to be named told Cook Islands News they turned up yesterday for a scheduled vaccination appointment, but was asked to leave.

The resident said they were told by people administrating the vaccine rollout to “ignore the date” and “go away and come back tomorrow”.

“We trust the health authorities,” the resident said. “We just look at the date and say, ‘see you then.’”

The resident said they had arranged their day in advance by freeing up all their business appointments to focus on receiving the second vaccination.

Due to pre-arranged business appointments, the resident said they would not be able to juggle their schedule and return to get vaccinated on the date suggested by health officials.

“You have to understand I gave up a lot of things to be here,” they said.

McKay didn’t go into detail as to why there were issues with some people’s dates, which were assigned after receiving the first dose of the vaccine.

She suggested people can refer to a table posted on TMO’s Facebook page which explains when people should get their second dose.

“For a couple of exceptions, the table marries up to the cards,” Mckay said.

As of 2pm yesterday, a total of 1,136 people had been vaccinated during day two of the second round of vaccinations.

The rollout for second vaccinations of Rarotonga residents is expected to finish on June 20, before heading out to the outer islands.