Tuesday 4 May 2021 | Written by Caleb Fotheringham | Published in Health, National 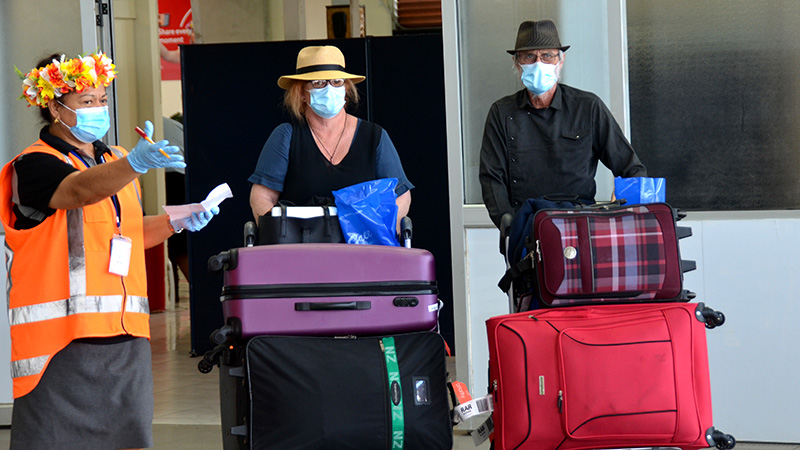 The May 16 two-way quarantine free travel announcement brings mixed feelings; people are pleased that businesses will receive the much-needed boost but are concerned it’s putting the health of Cook Islanders on the line.

“There are two sides to the coin,” said Davina Ashford, as she walked out of CITC shopping centre yesterday, “I guess you’re damned either way.”

Ashford wants the border open but wants the vaccine first, as another level of protection.

Cook Islands Prime Minister Mark Brown and New Zealand Prime Minister Jacinda Ardern on Sunday announced the commencement of the travel bubble from May 16 (Cooks time) pending final confirmation from the heads of health ministries of the two countries.

Rarotonga resident Ashford said she wasn’t confident in the medical facilities or border measures if the virus was to arrive.

The trans-Tasman bubble between New Zealand and Australia has also made matters more unsettling for Ashford.

“We will be in a bubble with Australia too,” she said.

Australians will have to spend two-weeks in New Zealand before they make the trip to the Cook Islands if they wish to come.

Ashford knows this, but indirectly still feels we are now sharing the same space.

She referred to the Cook Islander last week who breached trans-Tasman requirements by flying from Rarotonga to Perth via Auckland without spending 14 days in New Zealand.

She said if a mistake could happen that way, what’s stopping it from happening in reverse?

A woman who works at the gift and souvenir store, Treasure Chest, said she’s happy the borders will open but wanted the pre-departure Covid tests to remain in place, which will no longer be a requirement when the bubble comes into play.

She would also prefer New Zealanders to be vaccinated before coming to Rarotonga.

Another woman who worked in the same store asked: “Are we ready for this, are hospitals and everything ready for whatever is coming through that door?”

“Or are we just waiting for the money to come through, not caring about our people?”

Sitting outside of Foodland, Ngaro Iripa said the border was important for the economy but didn’t think it should be open.

“I don’t really agree that the border should be open now, it’s too early.”

Iripa doesn’t want the vaccine but thinks when the world settles down “maybe next year” it could be time to open the borders.

Running his food store at the Punanga Nui Market, Clerk Tangiura Turua said he’s got two thoughts on the borders.

“The yes is for our business people, they need to revive their businesses and all that. The no is we don’t want the Covid-19 to come.”

Turua said: “I pity our business people.” But he doesn’t think it’s a good idea to rush.

“We don’t know if it’s safe to open our border and New Zealand to come.

Turua said: “They’re not sure, they’re not really sure.”

Defence lawyer, Norman George in a letter to the editor to Cook Islands News on April 8 said the population needed to be vaccinated first. Yesterday George said his position is the same and he absolutely still wants the vaccines before the borders open. In Sunday’s announcement, New Zealand Prime Minister Jacinda Ardern said vaccines were likely to come this month. George said: “It is a great relief to say it’s coming”. But he would have preferred for it to come before May 16.

The Opposition Democratic Party wants vaccines to be administered before the opening of the border to Kiwi tourists.

Media spokesperson for the party, Flo Syme-Buchanan said, “the position remains unchanged”. On Sunday, Prime Minister Mark Brown told the Cook Islands News that a vaccine before the bubble opened would have been an extra layer of protection, but not necessary.

“We’ve always been confident that our health preparedness was at a level we could commence travel without the need for vaccination,” Brown said.

“Vaccination will no doubt provide us with an additional layer of protection for our people but if everything goes according to plan, we’re also looking at May for the arrival of vaccines into the country, so we can start the vaccination programme.”