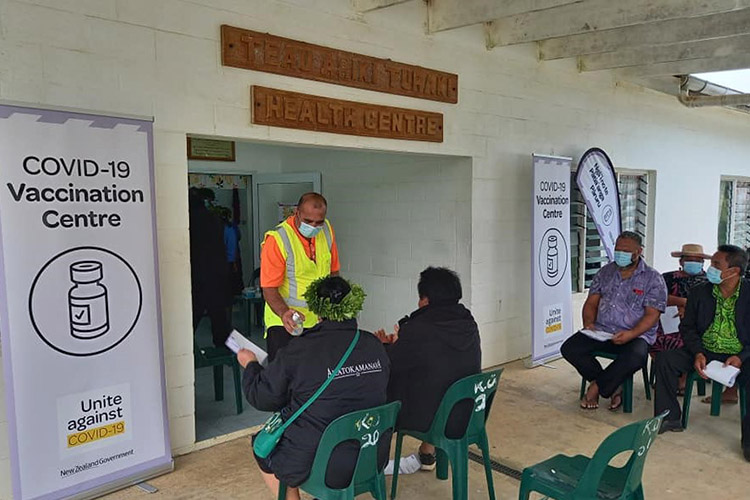 Mauke’s first vaccination rollout is complete, with its entire eligible population of 194 getting the first dose.

Mauke’s vaccination finished yesterday and is the first outer island apart from Aitutaki to receive the Covid-19 Pfizer vaccine.

Aitutaki’s second dose roll-out was completed on Wednesday last week and ended with 1152 people getting their second jab, three more than those who got the first shot.

The first roll-out had 1150 people take up the vaccine.

Te Marae Ora Ministry of Health spokesperson Jaewynn McKay said the extra people who got the second vaccine in Aitutaki were three Members of Parliament who received their first shot in Rarotonga.

McKay said it meant one person didn’t get their second shot from Aitutaki. She said the person either chose not to get the second shot or got it elsewhere.

The next outer island that will receive the vaccine is Mitiaro tomorrow, followed by Atiu, Mangaia, Pukapuka, Manihiki and Penrhyn.

The dates for Palmerston, Rakahanga, Nassau and Suwarrow will be confirmed later.

Secretary of Health Bob Williams previously discussed the idea of the New Zealand Navy helping with the vaccine rollout to the Pa Enua without airstrip’s but McKay said this was no longer the case.

Now she said the vaccine team will look for a day with good weather then fly to Pukapuka first using Air Rarotonga then take a boat to Nassau.

For Rakahanga, she said the vaccination team will either ferry from Manihiki or get the eligible population of Rakahanga to ferry to Manihiki where they can be vaccinated.

During phase one of the vaccination programme for Rarotonga, 8291 people received the first dose and 8069 for the second dose. A further 311 received their first shot during phase two rollout a week ago.

A total of 9221 people in Rarotonga and Aitutaki have been fully vaccinated.