The invertebrate biodiversity expedition on Raemaru 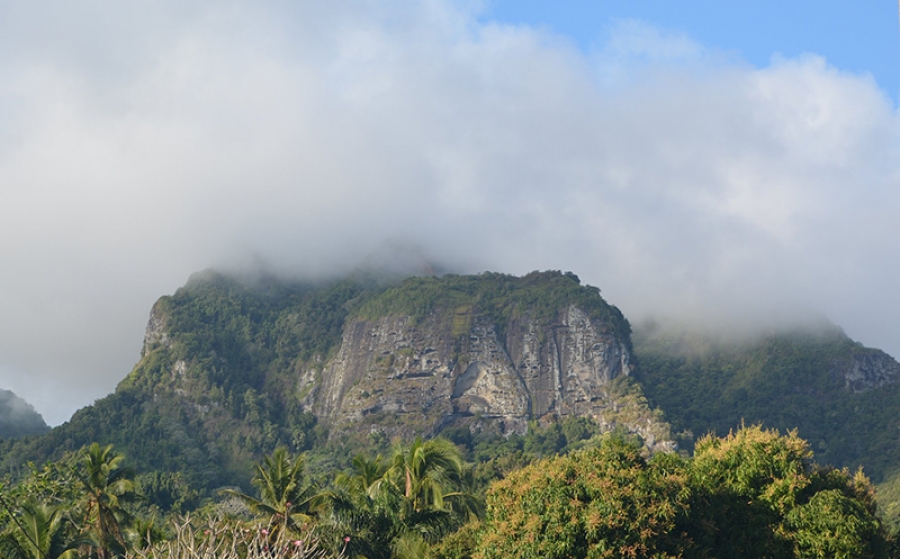 In December, author Gerald McCormack, who is also the director of the Cook Islands Natural Heritage Trust joined Joseph Brider of the Trust, Maja Poeschko and Kirby Morejohn on an expedition to the top of Raemaru.

The plan was to survey insects and spiders with a primary goal of finding and photographing the small psyllid insect that was found locally for the first time on a single shrub in 2017. The expedition encountered three unique Rarotonga insects, one undescribed, and of the seven locally-unrecorded species, only one was able to be identified.

Psyllids are well-known on Rarotonga because one species makes the disfiguring galls on the leaves of the medicinal plant, Ka‘ika Māori (Malay Apple). These sap-sucking insects lay eggs into the underside of leaves. As the entombed larvae grow inside the leaf, they make wart-like galls on the upper surface. When they become adults, they escape through the underside of the leaf.

The psyllid found on one Rata shrub (Metrosideros collina) on Raemaru in 2017 had previously been found only in the Marquesas islands, 2,500km northeast of Rarotonga. Finding it on Rarotonga was most unexpected, considering it had not been found on any of the intervening Society Islands. The Rata Psyllid was thought to be unique to the Marquesas until its discovery on Rarotonga in 2017. Gerald McCormack/21010804

We took a broad-minded view of its local distribution and laid our collecting sheet under the first small tree, a native Kaiatea (Samoan Weinmannia). We shook and beat its leaves with a stick. Many small creatures fell onto the sheet and were collected in vials, but no psyllid. The most interesting were silver dewdrop spiders, which were in the Trust’s biodiversity database but without a photograph. The large Rarotonga Weevil is unique to the island and lives almost exclusively on the leaves of the endemic Pua neinei (Rarotonga Fitchia). Gerald McCormack/21010805

The next shrub was also a Rata. It released lots of insects and spiders but no psyllids. The surprise was the large endemic Rarotonga weevil which does not live on Rata. However, it was then noticed that within the Rata there was a small Pua Neinei (Rarotonga Fitchia) with some leaves showing the wide channels eaten by the weevil.

The Rarotonga weevil is the Cook Islands sole member of a remarkably diverse and widespread group of flightless weevils. The current evidence supports the idea that about 13 million years ago, Samoan or Tongan ancestors gave rise to flightless descendants somewhere in the Austral and/or Society islands. From these unknown origin islands their sticky eggs were carried to other islands by a combination of migratory birds and floating vegetation.

In addition to the Australs with 22 species and the Societies with 17, they colonised and radiated in the Marquesas (24 species) and in Hawai‘i (47 species). Including a few on far-flung islands such as Wake, Mangareva, Henderson and Rarotonga, there are 118 species. All but three species occur on a single island. And while most islands have a single species, a few have more than one, such as Tahiti with eight and Rurutu with four. The Silver Dewdrop Spider is a food thief. Gerald McCormack/21010803

The female and male silver dewdrop spider are both about 3mm (millimetre) in body length, although the female is much more bulbous. They live by stealth and stealing. They sneak onto the webs of other spiders and suck the juice from unnoticed small prey, or more cheekily the juice from large prey wrapped in silk by the host spider. This life style is called kleptoparastism. This species is distributed all the way from Madagascar through Asia and Australia, across the Pacific and into tropical America.

The largest creature to land on the collecting sheet looked like a daddy-longlegs but later study showed it to be a female long-legged spitting spider, the clue being its six eyes instead of eight. It had a body length of 11mm with its front legs to 35mm.

This species is circumtropical and it makes a tangled web mainly for camouflage rather than to trap prey. At night they stretch out their long legs to detect prey, and if it feels suitable, they spit a sticky silk at it to immobilise it and venom in the silk seeps in to kill. They then inject digestive juices and suck out the resultant soup leaving behind the empty exoskeleton.

By early afternoon we had beaten a few more shrubs, but still no psyllid. The vote was to go to the summit for a lunch break. On the way we passed a large Rata shrub and agreed that we would give it a thrashing after lunch.

After a relaxing break we returned to beat the Rata, and numerous psyllids dropped onto the collecting sheet. In all likelihood this was the same shrub Dr Samuel Brown beat in 2017 to collect the specimens he identified as the same as those previously known only from the Marquesas. Our expedition had achieved its primary objective.

Upon inspection the leaves were covered in tiny lumps, certainly nothing like the large galls on Ka‘ika Māori. Rather sheepishly we realised that we should have simply inspected leaves for small galls, before giving them a beating. These handsome little insects are also part of the insect orchestra – which we cannot hear! During courtship, couples serenade each other by strumming their forewings over a rigid protrusion on their thorax. The Rarotonga Cranopoeus is a tiny weevil found only on Rarotonga. It is yet to be described. Gerald McCormack/21010807

Falling onto the sheet from the Rata were also tiny spiny-legged weevils that immediately played dead before trying to escape. Although these weevils have been collected several times in the last 30 years, no scientist has described them. They are in the genus Cranopoeus; we’ll call them Rarotonga Cranopoeus, because they are only found on Rarotonga.

They differ from described species on Tahiti and Niue, and from undescribed specimens from Ātiu and Mangaia, the latter two were found on the native Polynesian Elaeocarpus tree, known as Kūana on Ātiu and Orotea on Mangaia.  The Rarotonga Cranopoeus is a good flier and is therefore widespread on the island. We expect them to be described and given a Latin name within a year or two.

In 2017, weevil expert Samuel Brown spent eight weeks collecting weevils on Rarotonga, Mangaia, Ātiu and Miti’āro. He collected 75 species including 25 undescribed species, most of which are likely to be unique or endemic species of the Cook Islands or at least, of Southeast Polynesia.

On Raemaru, we also collected four species of barklice or Psocopterans, of which three were new records. However, barklice are widespread and these unrecorded species are probably native on Rarotonga but not unique to the island.