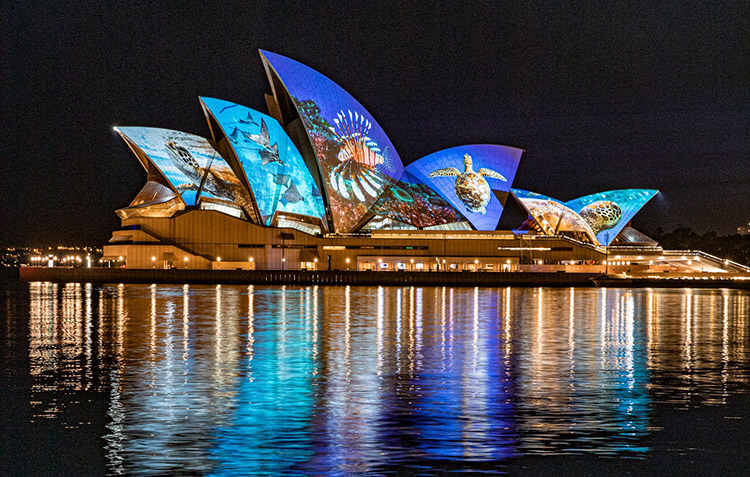 Award winning photographer Charlotte Piho had five of her photos featured alongside many of Australia’s most respected artists on the sails of the Sydney Opera House to mark World Oceans Day.

The Opera House lit up its sails with a ‘Kingdom of Coral’ artwork series on Monday night to celebrate the work of pioneering marine conservationist Valerie Taylor. Amongst these artworks were a selection of Piho’s famous underwater marine life images which include her iridescent turtle and eagle ray images.

The Rarotonga-based Piho described the opportunity and experience as a “dream come true”.

“I’m a little lost for words to express how truly humbled, grateful and honoured I am to have my work on Australia’s most iconic landmark. I am a little emotional in the happiest way,” she said.

“With the Sydney Opera House being Australia's most iconic destination, it was a true honour and the photographs featured were mainly taken here in the Cook islands.”

Piho is now an ambassador of CollaborOCEANS which is a supporter of the UN World Oceans Day’s global vision for 30 per cent of the ocean to be safeguarded with high protection marine zones by the year 2030.

“The oceans are the lungs of our planet,” Piho said as they cover 71 per cent of the Earth providing it with much of the oxygen humans need to breathe. “The oceans support the most magical array of wildlife and it is heartbreaking how it is facing unprecedented pressures such as pollution and climate change,” she said in an Instagram post with Timothy Johnston, member of CollaborOCEANS.

“We all need to come together and commit to better practices to help ensure we bring about a healthy ocean which will lead to a healthy and happy planet,” said Piho.