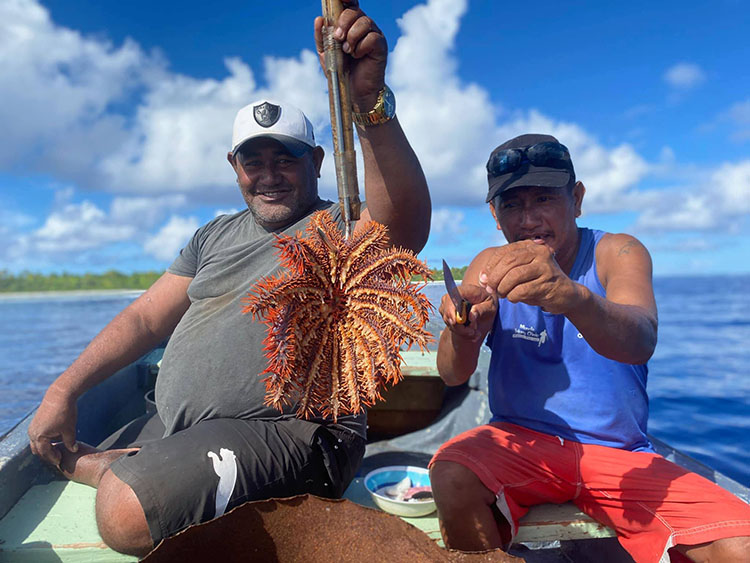 Pukapuka is working to remove crown-of-thorns starfish – taramea – from the Northern Group atoll’s reef to prevent the damage that it causes to the coral.

So far 460 taramea have been removed from the reef and brought ashore for disposal.

Pukapuka’s island council was asked about the number of taramea on the reef and in response a small team of government personnel set out to conduct a survey and retrieve samples.

They came back with 65 taramea in that sample alone, which generated interest among the island council members and the community.

Pukapuka’s drive to rid the reef of this damaging parasite has been supported by the National Environment Service and the Ministry of Marine Resources.

For nearly a month now a team of six government personnel, including Iorama Punga and Joe Mataio, as well as the local community on Pukapuka have participated in this initiative to collect as many taramea as possible.

When those on the neighbouring island of Nassau heard about the taramea eradication work in Pukapuka they decided to survey their reef and have been able to retrieve 135 specimens of taramea.

According to Pio Ravarua, the executive officer for Pukapuka, taramea thrives and revives itself on the reef more rapidly when the water’s temperature is cooler.

Ravarua said on March 31, a trip was taken to the reef where 335 taramea were retrieved. Another trip was taken only two weeks later, on April 16, where it was discovered nearly 100 taramea had already replaced the recently eradicated starfish.

He said that only a small area of Pukapuka’s reef has been treated, with a lot of area still needing to be covered.

“Our aim is to circumnavigate the whole island to make sure something can be done now, rather than later,” Ravarua said.

According to Wikipedia the crown-of-thorns, Acanthaster planci, is a large starfish that preys upon hard, or stony, coral polyps.

The crown-of-thorns starfish receives its name from venomous thorn-like spines that cover its upper surface, resembling the biblical crown of thorns. It is one of the largest starfish in the world.