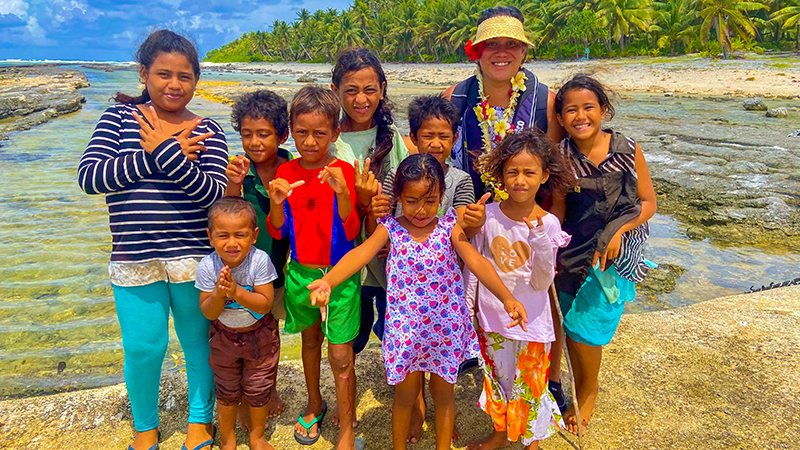 Palmerston and Nassau were the last islands to receive consultations on the Cook Islands seabed minerals (SBM) sector by the Government, as part of the recent government voyage on the MV Taunga Nui.

“It is fitting that we travelled by sea to reach Palmerston, Nassau and Pukapuka for these SBM consultations which took several days,” said Prime Minister Brown in a statement from Cook Islands Seabed Minerals Authority.“It was a good reminder of not only how massive our two million square kilometres exclusive economic zone (EEZ) is, but also gave us an appreciation of the travel constraints for our islands that are only accessible by boat.”

In its SBM presentations, Government introduced deep seabed minerals, in particular the nodules found within Cook Islands waters, estimated to be 12 billion tonnes. Government also explained the exploration licencing process currently underway, which would ultimately lead to more information and data collected on the marine environment.

Government made clear that it was only allowing exploration activities at this stage, with a decision on whether commercial harvesting could take place some years away. First up was Palmerston on January 28, 2021. It was a late evening consultation but this did not deter the engagement of the 32 residents, with the SBM presentation followed by a lengthy question and answer session finishing at about 11pm.

A key theme from the audience was that they found the presentation very interesting, and wanted more information on what was happening in the sector. The young people of Palmerston showed particular interest, with some doing their own research beforehand, but they still learnt a lot from the presentation. Juliana Marsters shared: “I would like to see more evidence to help enlighten our people so we are not left out…so let’s keep that information going.”

Executive Officer Arthur Neale initiated a discussion on the education curriculum and whether SBM issues were sufficiently incorporated in educational materials.

Teacher Sherrin Hibbard asked a number of questions, including on the potential environmental impacts of commercial harvesting. Alex Herman responded that the types of impacts were fairly well known, and that it was up to any exploration contractors to prove to the Government that they would be able to address and mitigate those potential environmental impacts before Government would consider allowing them to proceed commercial harvesting.

“I enjoyed the Palmerston consultation and the robust question and answer session,” said Herman “It goes to show, no matter how small or remote our community, they are just as interested and ready to engage. This is after all a national resource, and their voice is important.” The next island consulted was Nassau on February 3, which had a delayed start due to rough seas. Nevertheless, the island inhabitants welcomed the Prime Minister and his delegation with beautiful singing and warm smiles. After the kaikai, it was straight into consultations.

After the SBM presentation, the first speaker had the crowd laughing when he urged the Government to hurry up and get on with the extraction so that he could see the benefits in his lifetime.

Teacher Teautu Neiao asked about whether the commercial harvesting would affect the fisheries. Prime Minister Brown explained that the fish were mostly located in shallower waters of around 200 metres, whereas the nodules were located in much deeper waters up to 6 kilometres, and that extraction was not expected to affect fisheries. He added that the exploration research would look into this issue further to ensure that fisheries would not be affected. After the consultation, Neiao said she was happy with what Government shared, and wanted to see the SBM sector developed for the benefit of the country.

Several members of the community voiced their support for Government’s development of the sector, including admin officer Tuakatau Wuatai and Aronga Mana Tuaine William. Pukapuka had already been consulted by Government in the past, but the delegation took the opportunity to give the island an SBM update on February 4. It was another late consultation finishing at about 9pm.

Members from the Aronga Mana, Island Council, and the local community voiced their support for the SBM development.

George George shared that the SBM Advisory Committee were interested in what Maori name or names should be used for the word “nodule”, stating that this was important in assisting the Cook Islands people engagement with seabed minerals. The community put forward a few suggestions on a meaning in the Pukapukan language.

Mayor Levi Walewaloa wrapped up the consultation by reiterating Pukapuka and Nassau’s support for the Government’s development of the SBM sector.

“It was great to see our people’s interest in our SBM sector, and to receive their questions and feedback,” he said, “This is the whole purpose of our consultations: to engage with our people and to hear their views and concerns. It takes a lot of effort, but we are committed to it.”

One of the Seabed Minerals Authority’s key priorities for 2021 is stakeholder engagement, in particular with its Cook Islands people.

Herman said: “2021 is a big year for us, as we are running our licencing process for exploration – so it is all the more important for us to go out to our people so they understand what we are doing in this space, as well as giving them an opportunity to share their views.”

“We have started the year solidly with a few key consultations on Rarotonga and our Pa Enua, and we will continue to consult and engage with our people throughout the year.”