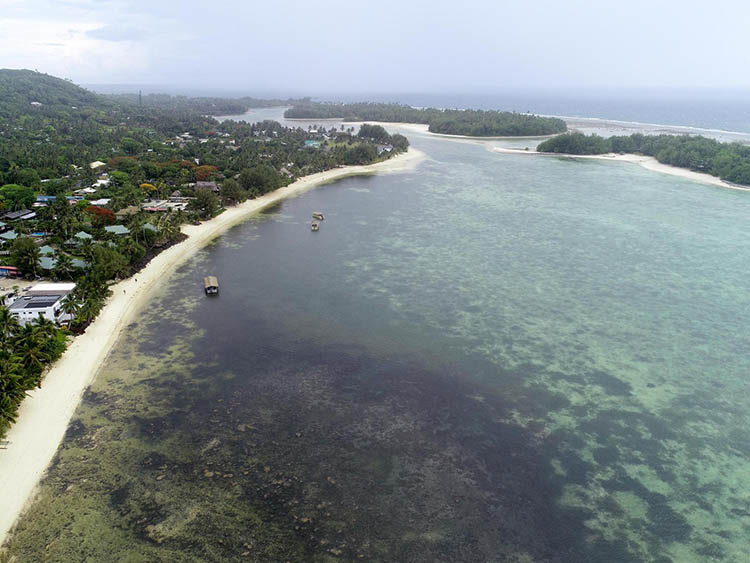 Muri lagoon is in dire condition as environmental conditions combined with human activity have resulted in the sudden death of marine life and a warning to residents to avoid swimming in the area.

A sudden and adverse change in the health of Muri lagoon prompted Government this week to advise residents to avoid swimming and the harvesting of seafood in the immediate area.

Scientists with the Ministry of Marine Resources believe the lagoon – regarded by many as one of Rarotonga’s crown jewels - has recently experienced an anoxic event.

Such events occur when a body of water is depleted of significant amounts of dissolved oxygen, which is necessary for marine life to flourish.

This week, the waters of the lagoon were observed to be heavily saturated with dark coloured sediment, and releasing a foul smell akin to rotten eggs.

A variety of dead animals were also found along the shoreline by MMR scientists, including fish, eels, sea cucumbers and marine worms called polychaetes.

The anoxic event in Muri is believed to be the result of higher water temperatures, low tides, minimal water movement, and the rapid decomposition of algae – which has grown excessively in the lagoon in recent years.

While mostly a natural process caused by factors such as the weather and water movement within the lagoon, MMR's Senior Marine Ecologist Dr. Lara Ainley said the anoxic event also had a link to human activity in the area, which is cited as the cause for the excessive growth of algae.

“Nutrient enrichment of the lagoon due to coastal development, agricultural run-off and poor wastewater management are leading theories about the issues causing the prolific algae growth in Muri – a situation that has been occurring intermittently for many years,” she said.

In a statement, MMR said a majority of marine life cannot survive when dissolved oxygen levels drop below 30 per cent, adding a healthy lagoon ecosystem requires levels at greater than 80 per cent at all time. One of the many fish observed on the beach in Muri by MMR scientists. PHOTO: Lara Ainley, MMR. 20123115

Tests were conducted this week by MMR at six sites in the lagoon from Avana to Paringaru Stream, revealing oxygen levels between 32.6 per cent and over 80 per cent.

The lowest recording was taken at a testing site along the shore roughly adjacent to the southern end of Motu Koromiri.

The water temperature at all testing sites was recorded to be at least 32 degrees Celsius, which the ministry said is roughly 4 degrees warmer than the average for this time of year.

“As microbes and animals consume the organic matter (the decomposing algae) they respire and use up the oxygen (warmer temperatures can help this process along too). If this process is happening rapidly enough, the dissolved oxygen can deplete very quickly,” said Ainley.

Test results have also indicated the presence of certain types of bacteria at sufficient levels which could be harmful to humans, prompting government to advise residents to avoid swimming in the lagoon.

“Swimming in water that contains high levels of bacteria and other pollutants can lead to skin conditions including infection and rashes. Swallowing contaminated water can lead to gastrointestinal infection including nausea, diarrhoea and vomiting,” the ministry warns.

Ainley said MMR will continue to monitor the situation in the coming day, however little can be done in the short-term to rehabilitate the lagoon. The ministry advised that dredging the passage wouldn’t address the problem.

“Removing the algae at this stage is too late because the system has already passed its tipping point,” the ministry said.

MMR said similar events have occurred previously, and that Muri lagoon is prone to such events due to the natural features of the area.