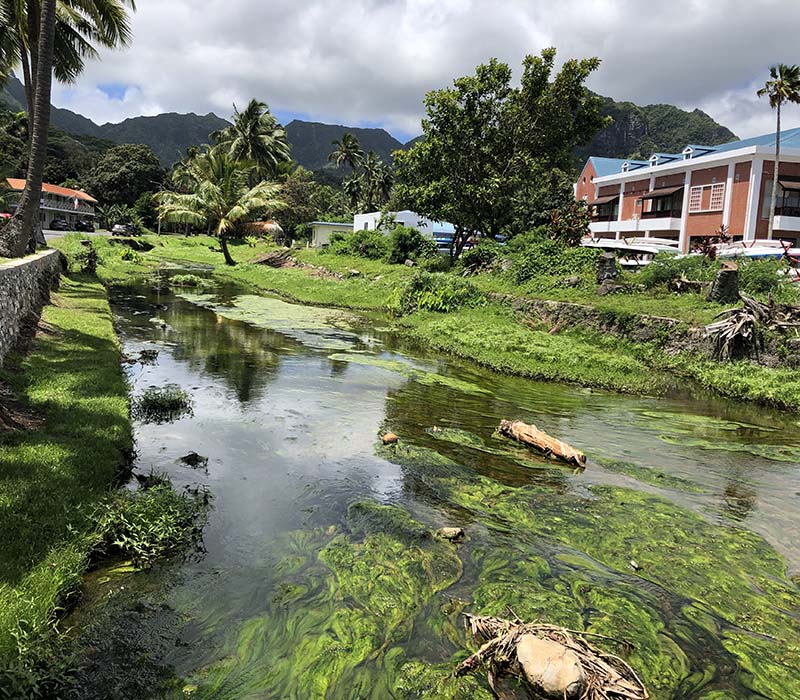 Fertiliser use in crop and livestock farming, animal droppings, septic tank seepage, and soil run-off into streams from land clearing activities have been cited as potential causes of excessive algae growth.

Local officials are short on answers as to what is causing the excessive growth of algae in a number of streams around Rarotonga.

The growth of the bright green algae has been noticed by staff of local non-governmental organisation Te Ipukarea Society as well as government officials. But questions remain as to what exactly is causing its growth and proliferation.

“When a lot of it appears suddenly like this, it is most likely a sign of high nutrients (pollution) entering the water, possibly further upstream,” Passfield wrote in an email to Cook Islands News.

“The nutrients could come from overflowing septic systems or run-off of agricultural fertiliser, both of which would be much worse after heavy rains.”

Passfield said another possible source of nutrients that’s fuelling the algae growth could be pigs that are kept too close to streams and waterways.

Secretary of the Ministry of Agriculture Temarama Anguna-Kamana has also seen many affected waterways in Rarotonga.

“There are many streams around the island where there is excessive algal growth, and such growth are clearly visible from the road,” Anguna-Kamana said.

She believes the presence of the algae is indicative of high levels of nutrients in the waterways.

Anguna-Kamana cited agriculture crop and livestock farming, droppings from wild animals such as chickens, seepage from septic tanks, and soil run-off into streams from land clearing activities as potential causes.

“I am not aware of any such intensive agriculture in close proximity to the Takuvaine stream and near the Empire Theatre,” she said.

“If there is any increase in planting, it would be home gardening activities and planting of small areas with root crops such as maniota, taro, and kumara.”

She said farmers cultivating taro do not use fertiliser.

Since 2004, the Ministry of Marine Resources has been monitoring the health of Rarotonga’s waterways and lagoon.

In June, the ministry issued a water quality report that showed stable levels of bacteria at Avana stream and Paringaru stream in Muri, but a number of other sites were at extremely poor levels.

Water testing results over the past decade have often showed excessive amounts of nutrients and bacteria in many of the island’s streams.