Vaka sets sail on maiden voyage to the North 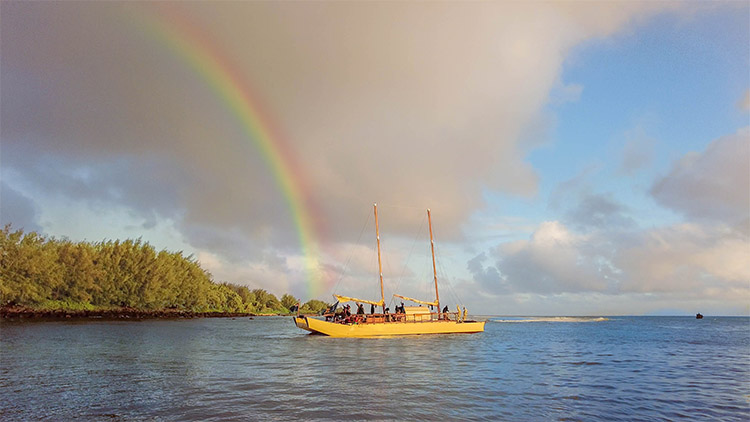 The traditional sound of the pu (conch shell), a double rainbow and a light soothing shower complimented the departure of vaka Marumaru Atua from Avarua wharf Wednesday morning.

Weather permitting, the vaka is expected to arrive to Aitutaki today before sailing on its first voyage “Taua E Moana” to the northern group islands.

Local environmental non-government organisations (NGOs) Kōrero o te 'Ōrau and Te Ipukarea Society have partnered on the voyage with the aim to share ocean health education, awareness and knowledge throughout the Pa Enua.

Vaka Marumaru Atua will also serve as a research vessel collecting microplastics samples from the ocean.

Te Ipukarea Society will check the rat traps on Suwarrow, collect butterflies on Pukapuka, and promote their Maine Mura project.

All crew onboard had received their second Pfizer vaccination except for a 15-year-old (not eligible for vaccination) and a crew member who opted not to undergo the vaccination.

There are no regulations of preventing the crew member from travelling, similar to what the current situation is for Cook Islanders travelling to the Pa Enua, said Cook Islands Voyaging Society board member Nooroa (Bim) Tou. Weather permitting, the vaka is expected to arrive in Aitutaki at some point Thursday.

Marumaru Atua is scheduled to depart Aitutaki on June 21 and arrive to Penrhyn island on June 28.

The voyage was made possible by supporting partners Nia Tero, Seacology and Synchronicity Earth, whose goals align with the indigenous and environmental missions carried by the three NGOs collaborating on this voyage.