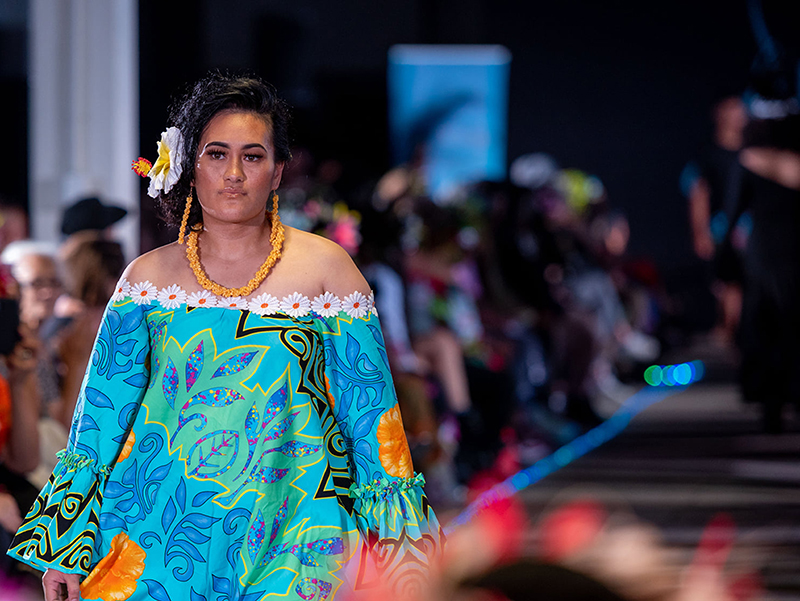 Rose Henry feels very privileged and honoured to be selected to represent her Cook Island culture and Pacific people on an international level.

Rose Henry is encouraging all young Pacific people “of all ages, shapes and sizes”, to take a leap out of their comfort zone for a while and get amongst trying something new.

“Go for it! Share your uniqueness with the world, stand confidently, tall and proud in your own skin and body, give it a go,” she says.

Henry is amongst a number of Cook Islanders who will be part of the London Pacific Fashion Week later in the year.

She is a New Zealand-based model, who will be travelling to London on September 15-18 representing the Top South Pacific Fashion Designers.

The 25-year-old says: “I feel very privileged and honoured to be selected to represent my Cook Island culture and our Pacific people on an international level at the London Pacific Fashion week 2021.”

She says this is a perfect opportunity for her to showcase and get amongst uniquely talented, creative and diverse artists from all walks of life on a world stage.

Henry, who has links to Aitutaki, Rarotonga and Atiu is based in south Auckland, New Zealand.

Her father is from Amuri, Aitutaki and mum is from Avatiu, Rarotonga and the beautiful island of Enuamanu.

She comes from a family of eight.

In an interview with London Fashion Week, Henry said she never really thought of actively getting involved in modelling both runway and fashion until she took part in the Aku Yanga Cook Island Fashion Show this year.

“Starting my career in modelling in 2020 as a 25-year-old Pacific island female, I was fortunate enough to debut my modelling career at Aku Yanga’s Cook Islands fashion show for their fifth consecutive year,” she says.

“I do plan to carry on my modelling career to represent our Pacific culture but more so of our homeland, the Cook Islands.”

According to Henry, the best thing about working with Aku Yanga is the chance to connect with other Cook Islanders.

“Everyone in this awesome production were Cook Islanders, from production and lighting crews, backstage crew, lunch providers, LadyK (makeup), Cedric Nooroa (Hair), Josha Ruta (Hair), costume designers Ina Ropu Tengaru, Toka Toka, Linda Turama Teika, Mitchell Manuel Dobre and other beautiful designers. That’s a rare thing to see, so to be a part of that is hugely inspiring. It tells us Cook Islanders that we can do more than what we’re individually capable of.”

Another model who will be representing Cook Islands at the London event is 24-year-old Anastasia Henry, who hails from Rarotonga and Aitutaki.

She also lives in Auckland and loves dancing, sports, playing instruments and has recently started her modelling and fashion career.

Vivian Engu, one of New Zealand’s top models, is also part of the London Pacific Fashion Week. She will model designer items at the event to be held at the Royal Horse Guards Hotel.

The young Cook Islander is also of Tongan and Fijian heritage.

Engu, who was also awarded New Zealand School of Tourism’s Student of the Year for 2017, has participated in 12 fashion shows including the New Zealand Fashion Week 2019.

“I am so happy I’m representing Cook Islands and Fiji. The platform is there to represent where we are from and our branding. So, I’m excited to go on an international platform.”

The models will be joining Cook Islands designers Toka Toka and Ina Ropu-Tengaru who are both excited to be part of the London event.

Ina Ropu-Tengaru has always had the passion to make dresses and has designed costumes for dancers for years. She was also part of the Aku Yanga fashion show held in November 2020 in Auckland.

In December 2020, she and Toka were in Wellington, New Zealand preparing for their very own ‘Rakei Toa Fashion’ showcase in Porirua.