Tuesday 11 May 2021 | Written by Melina Etches | Published in Culture, National 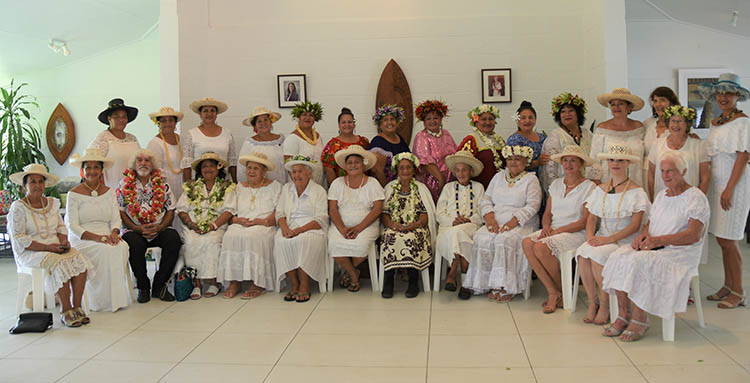 The New Zealand High Commissioner, Tui Dewes, hosted a special event last week in honour of women who contributed to the World Wat I and II effort, knitting items for the soldiers at war. 21050602.

Cook Islands women whose knitting skills helped keep soldiers warm on the front lines during World War I and II have been honoured.

The New Zealand High Commissioner, Tui Dewes, hosted a special high tea function last week at her official residence, Ngatipa, to pay tribute to the women, some of whom attended the event.

She said it was wonderful to have some of the “Forgotten Mamas” who had knitted socks, scarves and hats during World War II, attend the Anzac Day-related gathering.

Pa Ariki shared the emotional experience in her search for the women, which started in New Zealand and was completed in Rarotonga.

The known surviving women on Rarotonga are Ngamata Fuller, who is 95 years old and was a member of the Takuvaine Girl Guides at the time; Naomi Iro, Tapu Andrew, Tinomana Tokerau Ariki and Pito Maeva from the Seventh Day Adventist Church and Kia Tereora, who at the time was a trainee nurse from the island of Mangaia. Tepaeru Tereora and Tangi Bates Paniani reside in New Zealand.

The Ngatipa gathering was initiated by a photograph taken in the garden there over 100 years ago of Cook Islands women who knitted items bound for the frontline during World War I.

Many of these women had been taught to knit by Effie Northcroft, the wife of the then high commissioner, Henry William Northcroft.

In the old photograph, the women wore white to honour and celebrate them and the women, who attended last week’s function, also came dressed in white.

Although the rain prevented a recreation of the photo taken outside, the women gathered inside for a group picture.

The mamas enjoyed the afternoon sharing tributes, reminiscing and being together to commemorate the ‘Forgotten Mamas’.